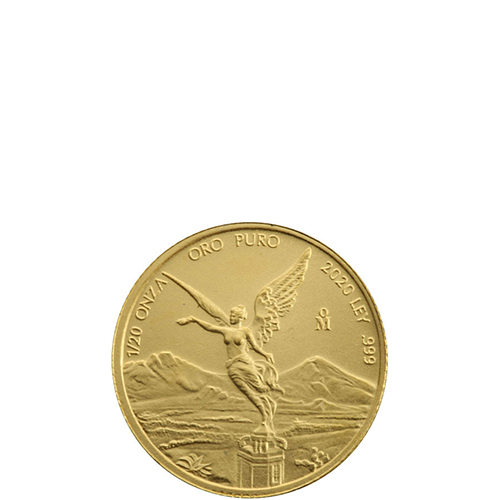 Gold Libertads and the silver counterpart are a unique bullion issue. Like the Gold Krugerrand of South Africa, these coins are considered legal tender in Mexico, but are produced by the Mexican Mint without an assigned face value. Though the face value would not be anywhere near the metallic value of the coin, should you want to use the coin commercially, Banco de Mexico could provide a spot price for the coin in Pesos.

1/20 oz Gold Mexican Libertad coins have been available in spurts since being introduced in 1991. The coins were originally available from 1991 to 1994 and halted until 2000. The issue of the coins in 2000 was a one-year blip that was followed by a one-year halt in 2001. Since 2002, the Mexican Mint has issued the coins annually.

The obverse side of the 2020 1/20 oz Gold Mexican Libertads features a depiction of Winged Victory. This design is based on the Mexican Independence Victory Column. The 22-foot statue of Victory featured on the column was actually created in 1910 to mark the 100th anniversary of the start of Mexico’s fight for independence. In 1921, to mark 100 years of independence following the struggle with Spain, Winged Victory was moved to the top of the Mexican Independence Victory Column built that year in the center of Mexico City.

On the reverse face of 2020 1/20 oz Gold Libertads is the modern coat of arms for Mexico. This seal is surrounded by a wreath around the bottom half and the words “Estados Unidos Mexicanos” along the top half.

These 2020 1/20 oz Gold Mexican Libertad Coins are available to you for purchase inside of protective plastic flips. Each coin is offered in Brilliant Uncirculated condition from the Mexican Mint.

Silver.com customer service is available to you at 888-989-7223. Alternatively, you can connect with us live online or simply send us an email.