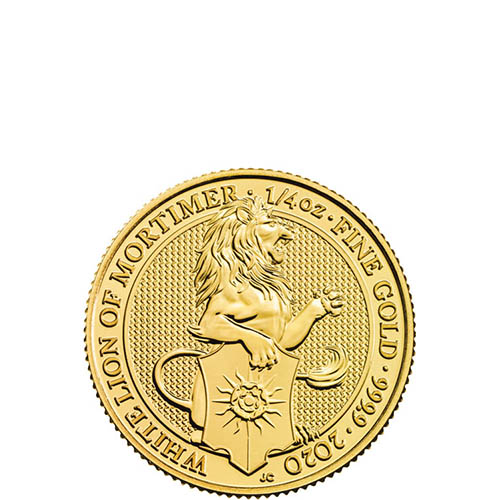 The gold coins for sale in the Queen’s Beast Series are available from the Royal Mint of England in two different bullion options. The 1/4 oz coin is the smallest in the series and is accompanied in the gold bullion range by the 1 oz coin. The White Lion of Mortimer is the latest release in the 10-coin series. Now, that 2020 1/4 oz Gold British Queen’s Beast White Lion Coin is available to you for purchase at Silver.com.

Queen’s Beast Series coins are available with different weights and finishes than the Proof Queen’s Beast coins in the gold range. Each of the gold bullion coins has a guilloche background element that resembles the appearance of braided rope. This is designed as a security feature that deflects light to help battle counterfeiting.

Additionally, the gold bullion coins feature different weights than their proof gold counterparts. While the 1/4 oz and 1 oz weights are only available in bullion, the proof gold coins have 1/4 oz, 1 oz, 5 oz, and 1 Kilo weights to choose from when buying gold.

On the reverse side of 2020 1/4 oz Gold British Queen’s Beast White Lion Coin is the image of the White Lion or Mortimer. This emblem was passed down from King Edward IV and includes a seated white lion supporting the shield of the House of York. The Yorkist shield is halved with mulberry and blue background behind a single white rose and golden rays of the sun.

The obverse face of 2020 Gold British Queen’s Beast White Lion Coins includes an effigy of Queen Elizabeth II. Her Majesty is the longest-reigning monarch in the history of Britain and this is the fifth-generation portrait of the Queen to grace the surface of British coins. Designed in July 2015 by Jody Clark, this design emerged on British coins in 2016.

These 2020 1/4 oz Gold British Queen’s Beast White Lion Coins are available to you in Brilliant Uncirculated condition. The coins are offered inside of protective plastic flips, tubes of 25 coins, or Monster Boxes of 500 coins that contain 20 tubes.

We encourage Silver.com customers to call us at 888-989-7223 with questions. You can also connect with us online using our live chat and email address options.