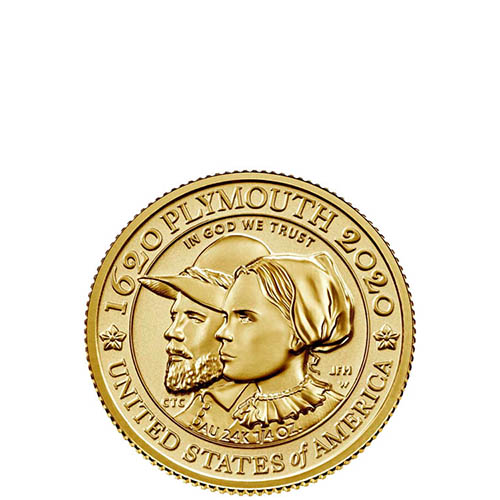 There were several significant voyages to the New World from empires across Europe, each one bringing drastic changes to the landscape and culture of the indigenous people already living in North, Central, and South America. One of the more significant voyages was that of the Mayflower. Departing England in September 1620, the Mayflower arrived off the coast of what is now Massachusetts in November 1620. Now, 2020 1/4 oz Reverse Proof Gold American 400th Anniversary of the Mayflower Voyage Coins are available to you for purchase online at Silver.com.

When the Puritans and other passengers on the Mayflower landed on the northern hook of Cape Cod in Massachusetts, they did not find a wild and empty land. For some 15,000 years, the Wampanoag people had inhabited this region of North America. Numbering in the thousands by the 17th century, the Wampanoag lived throughout southeastern Massachusetts, Rhode Island, and the islands of Martha’s Vineyard and Nantucket.

In fact, the Wampanoag are said to have numbered some 3,000 people on the island of Martha’s Vineyard alone at the time of the Mayflower’s arrival. Without the assistance of the Wampanoag, the Puritans and others aboard the Mayflower may not have lasted beyond the first winter in the New World.

On the obverse side of 2020 1/4 oz Reverse Proof Gold American 400th Anniversary of the Mayflower Voyage Coins is a family of Wampanoag people. The design captures a mother, father, and child looking on as the waters give way to the image of the Mayflower in the distance.

The reverse field of the 2020 Reverse Proof Gold American Mayflower Voyage Coin depicts portraits of two passengers from the Mayflower. The bulk of those traveling on the Mayflower were Puritans escaping the religious persecution of King James I of England. Those not of the Puritan belief on the ship were referred to simply as “strangers,” with most of them being explorers, tradesmen, and trappers.

These 2020 1/4 oz Reverse Proof Gold American 400th Anniversary of the Mayflower Voyage Coins have beautiful reverse proof visuals that include polished, mirrored design elements and frosted background fields. Each coin comes with a capsule, a blue US Mint display box, and a Certificate of Authenticity.

Silver.com customer service is available to answer your questions when buying gold at 888-989-7223. Alternatively, you can connect with us online through our live chat and email address features.