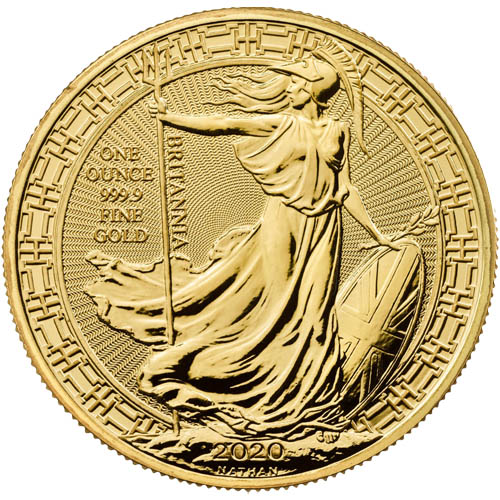 Gold Britannia coins are not the first from the Royal Mint to use an oriental border theme. The first coins to feature such an added element were the British Trade Dollars of the 19th century. Trade dollars were widely issued throughout the Far East by Britain, France, Japan, the United States, and China.

The issuance of trade dollars arose from British success in the First and Second Opium Wars. British victories enabled the colonial power to force open Chinese ports for global trade and to avoid issues with various currencies of different denominations, countries struck silver trade dollars for use in commerce at Chinese ports and other locations throughout the Pacific.

On the obverse side of 2020 1 oz Gold British Oriental Border Britannia Coins is a depiction of Queen Elizabeth II. Created in 2015, this fifth-generation design from Jody Clark shows the Queen at the age of 89 wearing the George IV State Diadem Crown. A ceremonial crown, this particular piece of the Crown Jewels is traditionally worn only during the monarch’s State Opening of Parliament.

The reverse face of 2020 Gold British Oriental Border Britannia Coins comes with the image of Britannia standing guard on the coast of the British Isles. Her trident gives her power of the seas and her shield emblazoned with the Union Jack helps protect the country. She is ready for war, but hopeful for peace as she holds an olive branch in her left hand.

These 2020 1 oz Gold British Oriental Border Britannia Coins are available to you with individual protective plastic capsules to house the coins. Each coin is offered here in Brilliant Uncirculated condition.

Silver.com encourages you to contact us with questions at 888-989-7223. We are also available to you online through our live chat and email address features.