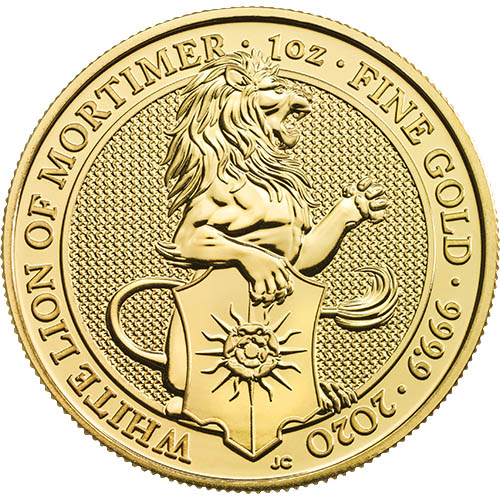 The 1 oz gold coin in the Queen’s Beast Series is the largest gold bullion coin available from the Royal Mint of England. In total, the Royal Mint offers five bullion coins in the series that include 2 oz silver, 1/4 oz gold, 10 oz silver, and 1 oz platinum in addition to these 1 oz coins. Right now, 2020 1 oz Gold British Queen’s Beast White Lion Coins are available to purchase online at Silver.com.

On the reverse of 2020 1 oz Gold British Queen’s Beast White Lion Coins is the image of the House of York’s second heraldic beast. The White Lion supported the Royal Arms during the reign of Edward IV and was separated from the Lion of England. The former is depicted in a seated position with its tail between its legs and no crown, while the Lion of England is in the rampant pose with a crown.

The obverse of 2020 Gold British Queen’s Beast White Lion Coins bears the effigy of Queen Elizabeth II. Her Majesty is depicted in right-profile relief in this fifth-generation effigy that was created in 2015 by Jody Clark.

If you have any questions, please don’t hesitate to reach out to Silver.com. You can call our customer service team at 888-989-7223, chat with us live online, or send us an email.