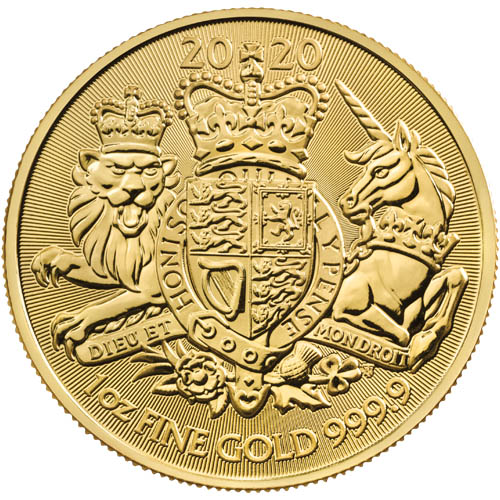 The modern Royal Arms of England carried by Queen Elizabeth II dates back to the reign of her great-grandmother, Queen Victoria. When Victoria ascended the throne in 1837, the shield at the heart of the Royal Arms took on its present design. Dropped from the design at that point in time was the coat of arms for the House of Hannover that had controlled the throne for more than a century.

All of these 2020 1 oz Gold British Royal Arms Coins are available to you for purchase inside of individual plastic capsules. If you purchase multiples, coins up to 10 in number ship in mint tubes and multiples up to 100 coins ship in a box that contains a total of 10 tubes. All of the coins in this listing are available in Brilliant Uncirculated condition.

On the obverse face of 2020 Gold British Royal Arms Coins is a bust of Queen Elizabeth II. This is the fifth-generation effigy of Her Majesty on British coinage. It was designed in July 2015 by Jody Clark and debuted on 2016 date-marked coins from the Royal Mint of England. The design captures the Queen in right-profile relief at the age of 89 wearing the George IV State Diadem Crown.

The reverse side of 2020 1 oz Gold British Royal Arms Coins features a design of the modern Royal Arms of England from Timothy Noad. The Royal Arms includes a quartered shield supported by the Lion of England and the Unicorn of Scotland, an element of the design that dates back to 1603 and the physical unification of the English and Scottish crowns with King James I of England.

Please contact Silver.com with any questions. You can reach us on the phone at 888-989-7223, chat with us live online, or email us directly.