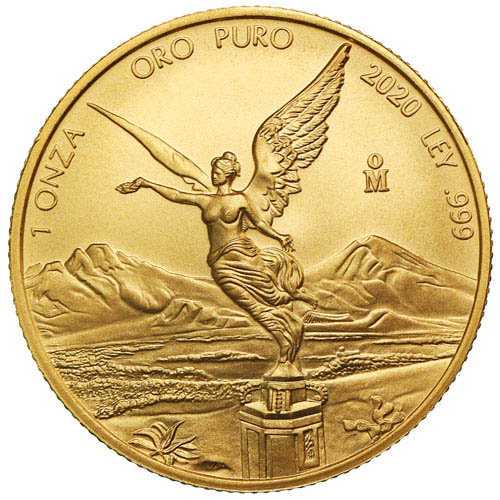 The gold for sale in the Gold Mexican Libertad series offers something for every investor. The series launched in 1981 with 1 oz, 1/2 oz, and 1/4 oz options for just one year. Since 1991 however, the coins have been available every year in those same three weights, as well as 1/10 oz and 1/20 oz coins. Right now, 2020 1 oz Gold Mexican Libertad Coins are available to purchase online at Silver.com.

Each 2020 1 oz Gold Mexican Libertad Coin in this product listing comes to you in Brilliant Uncirculated condition. The coins can be purchased individually inside of protective plastic flips or in multiples of 10 with mint tubes. The 1 oz Gold Libertad Coins have long had much lower mintage figures each year than other major gold bullion coins.

Winged Victory features on the obverse of 2020 Gold Mexican Libertad Coins. This design was first created for the gold Centenario coin in 1921, but her image first appeared in Mexican culture during the nation’s revolution against Spanish colonial control. Winged Victory is based on Victoria, the Roman goddess of victory that was held up as a symbol of resistance by the Mexican people.

The reverse of 2020 1 oz Gold Mexican Libertad Coins features Mexico’s coat of arms. The seal in the center of the design field is the modern depiction of the coat of arms and features a golden eagle in battle with a serpent. Some version of this seal has been used by Mexico since its independence in 1821. There are 10 versions of that seal included around the design field on this side of the coin.

If you have any questions, we encourage you to reach out to Silver.com with your inquiries. We are available to you on the phone at 888-989-7223, on the web using our live chat service, or via our email address.