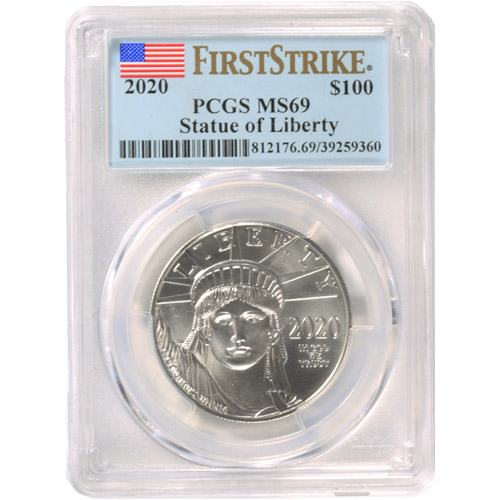 Platinum Eagles are issued by the United States Mint annually again as of 2016. However, prior to that, the coin had seen two suspensions in production. After being available from 1997 to 2008, the BU Platinum Eagles were not struck from 2009 to 2013. The 1 oz version was the only coin available when the series returned in 2014, but it too was again suspended in 2015. As of 2016, the coin is back for annual issue.

All of the 2020 1 oz Platinum American Eagles in this product listing are available to you for purchase here in near-perfect condition. The PCGS issues a Mint State 69 certification to coins with full, original mint luster and a maximum of two minor detracting flaws. Examples of those flaws include minuscule contact marks or hairlines that must be located outside of the primary focal points of the coin. The First Strike label indicates the coins arrived within 30 days of original release for grading.

The reverse bears a depiction of the American bald eagle gliding in flight. Thomas D. Rogers created the image on the reverse of the 2020 1 oz Platinum American Eagle in 1997 for the United States Mint. It depicts the bald eagle as it glides over the nation while the sun rises on the horizon.

Please feel free to reach out to Silver.com with any questions. You can call us on the phone at 888-989-7223, chat with us live online, or simply send us an email with your inquiries.