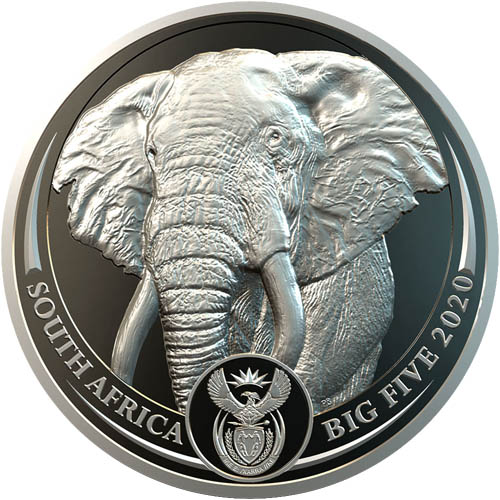 The African bush elephant is a popular character to feature on bullion coins. The African Wildlife Series has long used the animal as the focus of the Somalia Elephant collection and it has also featured in the Rwandan Wildlife Series. Now, the largest land mammal in the world is also the leader of the pack in the Big Five Collection.

The South African Mint bills the Big Five Series as a collection of some of the most fearsome animals on the African continent. Whether the beasts are truly massive in their own right, like the African elephant, or posed an existential threat to human life like the African lion, the creatures depicted in this series are well-known to mankind.

On the reverse side of 2020 Platinum South African Elephants is a depiction of two elephant heads that seemingly merge as one in the center of the design. The two beasts stand side by side with the ears appearing to become one. In the center of the field, you will notice a circle with the weight, metal content, purity, and face value of the coin.

Silver.com customer service is available to answer your questions about platinum coins at 888-989-7223. We are also available online through our live chat and via our email address.