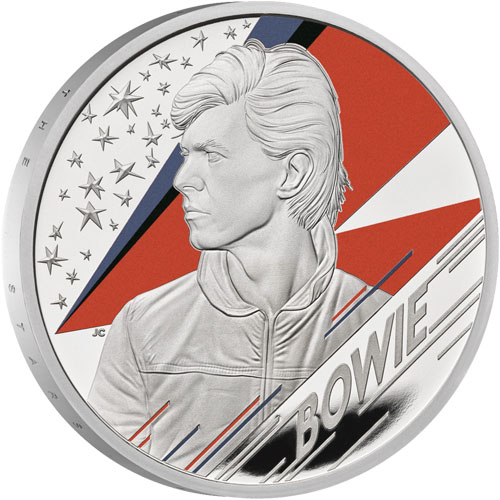 Introduced in 2020 by the Royal Mint of England, the British Music Legends Series features distinctive images honoring some of the most influential musicians and groups in the history of Britain. As the third release in the collection, the record-setting singer and songwriter David Bowie joins the previous release of Queen and Elton John. Today, 2020 1 oz Proof Silver British Music Legends David Bowie Coins are available to you online at Silver.com.

David Bowie is one of England’s greatest contributions to the music world. His talent transcended decades and he was recognized with multiple honors for the sales his music achieved. In the United Kingdom, his albums earned a total of 10 platinum certifications, 11 gold certifications, and eight gold certifications. He also released eleven albums that reached number one on the charts.

All 2020 1 oz Proof Silver British Music Legends David Bowie Coins are proof specimens with frosted designs and mirrored fields. The coins in this weight are available with black display boxes and a capsule to house the coin. You will receive a Certificate of Authenticity with your coin.

On the obverse side of 2020 Proof Silver British Music Legends David Bowie Coins is the latest effigy of Queen Elizabeth II. Created in 2015, the design debuted on 2016 date marks from the mint and shows the Queen wearing the George IV State Diadem Crown. Commissioned during the first year of King George IV’s reign, the State Diadem is traditionally worn by the Queen during the State Opening of Parliament.

The reverse face of the 2020 1 oz Proof Silver British Music Legends David Bowie Coins comes with an image of David Bowie. The musician is shown here from the era of his life and work when he was residing in Berlin and recording music. The background field includes stars in the upper left with a red lightning bolt behind his figure.

British Music Legends Coins are available in gold and silver, with proof and Brilliant Uncirculated options available in both metals.

Please contact Silver.com with any questions about silver for sale. You can call us on the phone at 888-989-7223, chat with us live online, or email us directly.