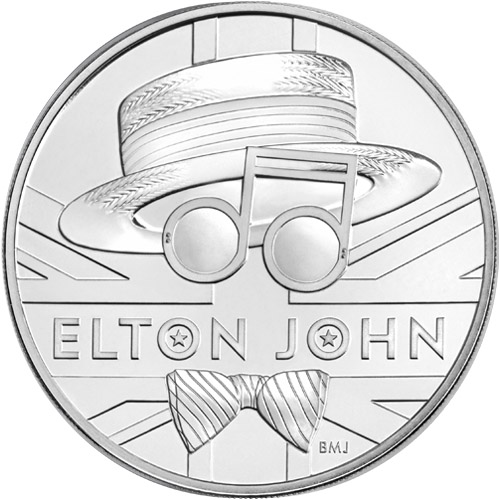 The silver coins for sale in the Royal Mint of England’s Music Legends Series feature various designs, styles, and weight options for investors and collectors to consider. The proof series offers 1/2 oz, 1 oz, and 2 oz proof coins. Additionally, the collection has a Brilliant Uncirculated 1 oz silver coin. The second design features none other than Sir Elton John. Now, 2020 1 oz Proof Silver British Music Legends Elton John Coins are available to you for purchase online at Silver.com.

The debut issue of the new British Music Legends Series at the Royal Mint of England was the Queen coin representing one of the greatest rock bands of the last four decades. That release introduced the variety of coins to come with all subsequent releases, including silver bullion, silver proof, and gold coins.

Elton John is the second British rock legend to feature in the series and the first solo artist to do so. John has been active in the British music scene since 1962 when he founded Bluesology, an R&B band that he would go on to perform with for five more years.

The obverse face of the 2020 1 oz Proof Silver British Music Legends Elton John Coin includes the effigy of Queen Elizabeth II. In this design, the Queen is shown in right-profile relief at the age of 89. She wears the George IV State Diadem Crown on her head. Part of the Crown Jewels, the George IV State Diadem Crown was commissioned in the first year of King George IV’s reign and includes an astonishing 1,333 diamonds weighing more than 300 karats in total.

On the reverse side of 2020 Proof Silver British Music Legends Elton John Coins is a collection of some of John’s most famous attire. He has always been known for his flashy, flamboyant style, and nothing is more representative of his appearance than the famous boater hat, glasses, and bow tie set against the Union Jack on this face of the coins.

These 2020 1 oz Proof Silver British Music Legends Elton John Coins are available to you inside of individual black presentation boxes from the Royal Mint. Each coin comes with its own Certificate of Authenticity, colorized visuals on select reverse design elements, and proof elements that include frosted designs and mirrored fields.

Silver.com customer service is available to assist you on the phone at 888-989-7223. Alternatively, we are available online using our live chat and email address features.