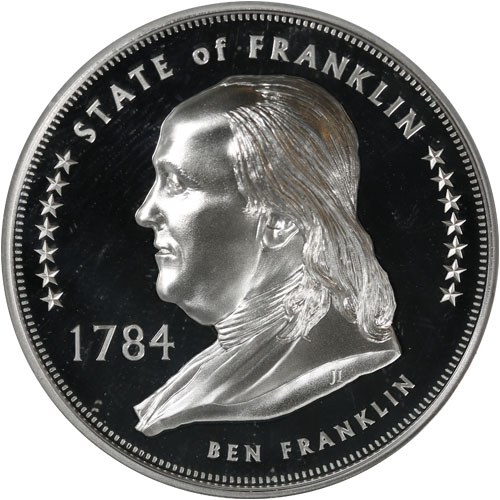 American history is chock full of interesting stories and struggles, and some of them are related to potential states and territories that never made it to statehood. The Lost States of America series will include 20 total designs created by Joel Iskowitz. Four were released in 2020, including the 2020 1 oz Proof Silver Cook Islands Lost States of America Franklin Coin.

Your 1 oz silver coin will arrive in a protective plastic capsule. The transparent capsule is a great way to store this coin to continue to protect its high relief design through the years.

The obverse of the coin features an image of Benjamin Franklin. The stunning details bring the American patriot to life, and the portrait is left facing. Around Franklin’s effigy are inscriptions that declare State of Franklin and include a shortened version of his name: Ben Franklin. The year 1784 is also included, as this is the year the area known as Franklin was established.

On the reverse of the 2020 Proof Silver Cook Islands Lost States of America Franklin Coin you’ll find the image of an eagle soaring over a beautiful landscape. Below it, a copy of the standard Cook Islands silver dollar coin appears, complete with the portrait of Elizabeth II. Inscriptions are included for the smaller coin image as well as around the overall coin as a whole.

This Lost States of America coin commemorates the state of Franklin, which was also called Frankland. The land that made up this area was controlled by North Carolina but is located in part of what is now Tennessee. In 1784, the area was offered by North Carolina to the federal government to cover debts the state owed. Ben Franklin is associated with this lost state solely because it was going to be called Franklin in a bid to get support from the man — he did not publicly give it.

Order your 2020 1 oz Proof Silver Cook Islands Lost States of America Franklin Coin now on Silver.com. Call us at 1-888-989-7223 or reach out via email or chat if you have questions.