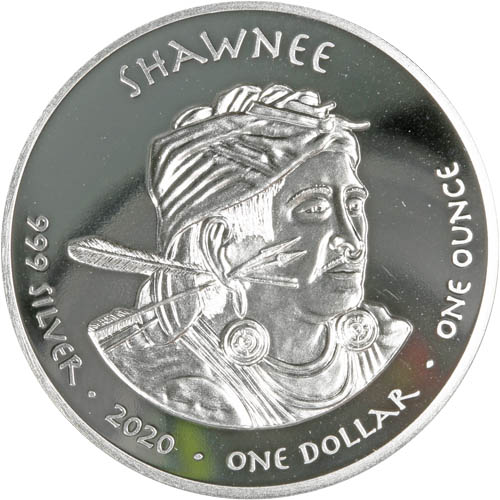 In the second release of the 2020 Proof Silver Dollar Coins from the Native American Mint, the Shawnee nations are featured in a design that is released for one of the two states these indigenous people once called home. The reverse design features one of the most common rodent species in North America: squirrels. Today, 2020 1 oz Proof Silver Kentucky Shawnee Squirrel Coins are available to you online at Silver.com.

Today, the Shawnee nations predominantly reside in Oklahoma, the former Indian Territory established in the early 19th century by the federal government as a place to relocate indigenous tribes. Although there are 7,584 enrolled members in the modern Shawnee nations, there are some 14,000 in total that self-identify as Shawnee. Many of those who self-identify as Shawnee still live in the various states that make up the historical homelands of the Shawnee.

All 2020 1 oz Proof Silver Kentucky Shawnee Squirrel Coins available here today have proof visuals that include frosted designs and mirrored background fields. The coins are individually offered inside of protective plastic capsules. The Native American Mint cannot legally issue coins with USD values, as the United States Mint has the sole legal authority to do so. However, the sovereign indigenous nations that back these coins do support the assigned value.

On the obverse of 2020 Proof Silver Kentucky Shawnee Squirrel coins is the image of an indigenous tribal member. The Shawnee people once inhabited the entirety or portions of the states of Ohio, Kentucky, West Virginia, Virginia, Pennsylvania, Maryland, Alabama, South Carolina, Indiana, Illinois, Missouri, and Kansas.

The reverse side of 2020 1 oz Proof Silver Kentucky Shawnee Squirrel coins includes a depiction of a squirrel. One of the most common rodents in North America, the squirrel family actually includes tree squirrels, ground squirrels, chipmunks, marmots, woodchucks, flying squirrels, and prairie dogs. Native to the Americas, Eurasia, and Africa, squirrels are now common in Australia as well where humans introduced the species.

Please don’t hesitate to contact Silver.com with your questions about silver for sale in this collection. You can reach us on the phone at 888-989-7223, online using our live chat, and via our email address.