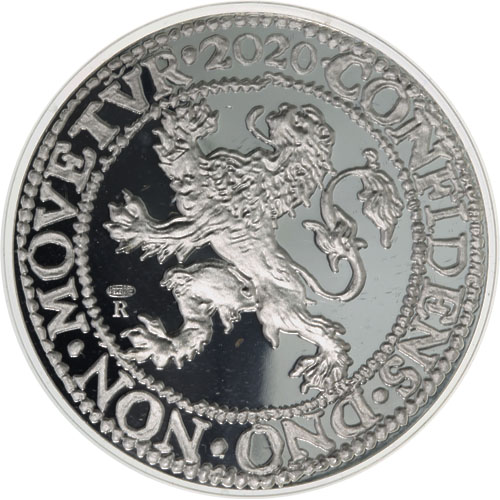 The history of the Dutch lion dollar is complicated and extensive. In 1575, the province of Holland issued the first lion dollar as it was fighting for its independence. Starting in the 1610s, other provinces began to issue a similar lion dollar. By 1651, six of the seven Dutch provinces were issuing the same lion dollar design you will now find on these commemorative proof silver coins.

All of the 2020 1 oz Proof Silver Netherlands Lion Dollars in this product listing at Silver.com are available with beautiful presentation packaging. The silver coins are available with a protective acrylic capsules and a presentation display box from the Royal Dutch Mint. Also included with your purchase is a Certificate of Authenticity from the mint. Each coin has frosted design elements with mirrored background fields.

On the obverse side of the 2020 Proof Silver Netherlands Lion Dollars is an image of a rampant lion. This rampant lion is directly inspired by the most common design of the Dutch lion dollar from the 17th century. Used on coins that would circulation the globe, the image simply features a large lion in a rampant pose.

The reverse face of 2020 1 oz Proof Silver Netherlands Lion Dollars includes two design elements. In the background, there is a Dutch knight with a metal helmet and fabric military regalia. In the foreground at his feet, there is the Dutch coat of arms with a rampant lion in left-profile relief. This is the same design that is also commonly used on the Belgian coat of arms.

Please feel free to contact Silver.com with any questions you might have about these coins. You can call us on the phone at 888-989-7223, chat with us live online, or send us an email directly.