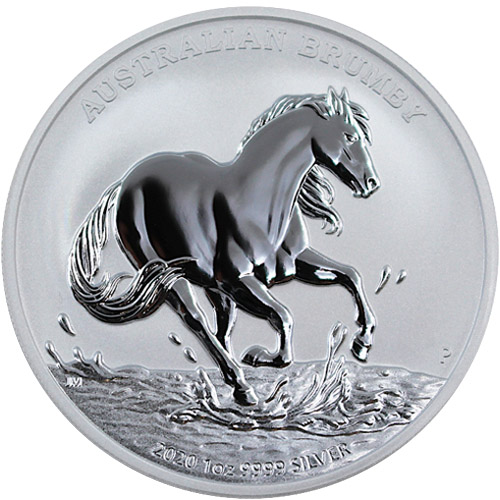 Descendants of escaped and lost domesticated horses, the Brumby is not a breed, but rather a collection of free-roaming horses on the Australian continent. The members of the Brumby herds originate from European settlers and have continued to live and breed in the Australian wilds, adapting to occasionally harsh environments to live on centuries later. Today, 2020 1 oz Silver Australian Brumby Coins are available to you online at Silver.com.

Brumbies, as the “mobs” or “bands” of the wild horses are known in Australia, have managed to survive for more than two centuries in the wilds of Australia through adaptation and a bit of luck. There are no known predators of the free-roaming horses, though it is possible for foals to fall prey to dingoes or other wild dogs. The Australian government estimates 20% of the population dies each year from drought-related issues, poisonous plants, and parasites, while the population growth rate has been estimated to increase annually by 20-25%.

All of the 2020 1 oz Silver Australian Brumby Coins available here today come with either individual plastic capsules from the Perth Mint or a tube of 20 silver coins. Each one of the coins is available to you in Brilliant Uncirculated condition in this listing.

On the obverse side of the 2020 Silver Australian Brumby Coin is a bust of Queen Elizabeth II. The design featured here was created in 2015 by Jody Clark for the Royal Mint of England. The sixth-generation effigy of Her Majesty on Australian coins, this depiction shows the Queen at the age of 89 wearing the George IV State Diadem Crown.

The reverse face of 2020 1 oz Silver Australian Brumby Coins includes a design from Jennifer McKenna. Her design of the wild, free-roaming horses shows one of the powerful creatures running through a shallow body of water as its hooves kick up splashes of water. Each coin has an authentication feature on this face that you will only see with the aid of magnification.

Founded in 1899, the Perth Mint was intended to be the third branch facility of the Royal Mint of England in Australia. However, just three years after its opening, Australia began its federation movement to earn independence from Britain. The mint served an ambiguous role during the five decades to come and eventually became a state-owned entity of Western Australia. Under the Currency Act of 1965, its coins are Australian legal tender.

Please contact Silver.com with any questions when buying silver. You can call our team at 888-989-7223, chat with us live online, or email us.