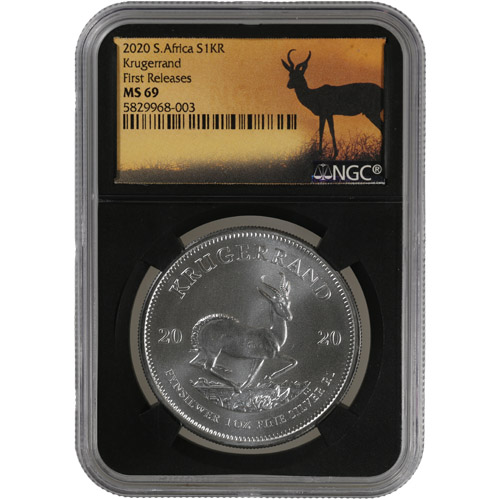 The Silver Krugerrand debuted at the South African Mint in 2017. The first-ever issue of the coins came during the 50th-anniversary celebration for the Krugerrand Series and that silver coin was issued as a Premium Uncirculated specimen. Starting in 2018, the series became a new annual option from the South African Mint. Now, 2020 1 oz Silver South African Krugerrands are available to you for purchase online from Silver.com in near-perfect condition.

In 1967, the South African Mint and Rand Refinery introduced the Gold Krugerrand as a means of private gold ownership and a vehicle for the promotion of South African gold. The coins were issued only as 1 oz gold specimens from 1967 to 1980, with fractional-ounce coins issued starting in 1980.

From 1980 onward, the Gold Krugerrands were issued each year with 1 oz, 1/2 oz, 1/4 oz, and 1/10 oz gold coins. In 2017, the South African Mint and Rand Refinery introduced the first-ever Silver Krugerrand. This year also saw the commemorative release of a first-ever Platinum Krugerrand, the latter of which was not issued again.

The obverse side of 2020 Silver South African Krugerrands comes with a portrait of Paul Kruger, the first President of the South African Republic. An influential Boer figure in 19th-century South Africa, he was a beloved leader who was often known by the term Oom Paul in Afrikaans, which translates as Uncle Paul.

On the reverse field of the 2020 1 oz Silver Krugerrand Coin is an image of the Springbok antelope. The national symbol of South Africa, the antelope is shown in right-profile relief in a motion known as pronking.

These 2020 1 oz Silver South African Krugerrands are available in near-perfect condition. Mint State 69 coins showcase full, original mint luster and a maximum of two minor detractions. Examples of these flaws include only minuscule contact marks or hairlines that must be located outside of the primary focal points of the coin. Please note that you may receive coins with matching labels if you buy more than one in this listing.

Silver.com customer service is available at 888-989-7223. Additionally, you can chat with us live online or simply send us an email with your inquiries.