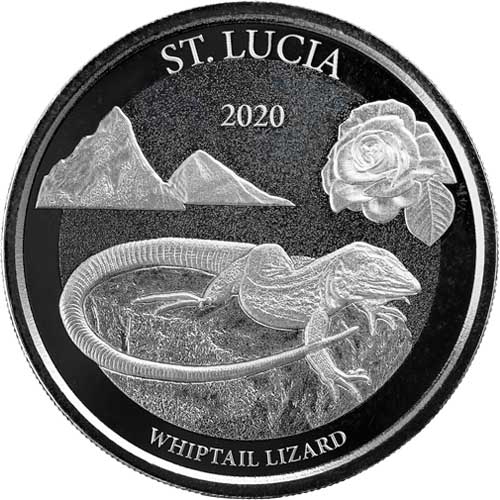 The Scottsdale Mint issues the EC8 Series of gold and silver coins for sale on behalf of the member states of the Eastern Caribbean Central Bank. The ECCB is the monetary authority controlling the Eastern Caribbean dollar, a regional fiat currency adopted by eight of the 11 members of the Organisation of Eastern Caribbean States. Now, 2020 1 oz Silver St. Lucia Whiptail Lizard Coins are available to you for purchase online at Silver.com.

The Eastern Caribbean Central Bank, or ECCB, was founded in 1983 with the purpose of maintaining stability and integrity for the currency and banking system in this particular region of the Caribbean. Rather than relying on the currencies of other world powers or former colonial rulers, the participating nations use the Eastern Caribbean dollar (XCD) backed by the ECCB.

For the most part, the member states of the OECS also participate in the ECCB by using the Eastern Caribbean dollar. There are three exceptions to this. The British Virgin Islands, though it is a British Overseas Territory, uses the United States dollar as its official currency. Guadaloupe and Martinique, both overseas departments and regions of France, use the Euro as the official currency.

The obverse side of 2020 1 oz Silver St. Lucia Whiptail Lizard Coins depicts an image of Queen Elizabeth II. This right-profile bust of the Queen was created in 1998 by Ian Rank-Broadley and featured on British coinage from 1998 to 2015. The fourth-generation design of the Queen’s image, the design includes the Girls of Great Britain and Ireland Tiara on the head of the Queen.

On the reverse field of the 2020 Silver St. Lucia Whiptail Lizard Coins is an image of a whiptail lizard on a rock. The whiptail lizard is formally known as the Cnemidophorus, but it commonly referred to as the whiptail lizard or racerunner. Locals on St. Lucia refer to the whiptail lizard as “Zando” and the creatures are considered endangered on the lush, tropical island. This is the only species of whiptail found on any of the islands of the Caribbean. All other species are found on the mainland in Central and South America.

2020 1 oz Silver St. Lucia Whiptail Lizard Coins are packaged individually in plastic flips or in skinboards of five coins each. All of the coins are in Brilliant Uncirculated condition.

Silver.com customer service is available to assist you with inquiries at 888-989-7223. We are also available to you online through our live chat and email address features.