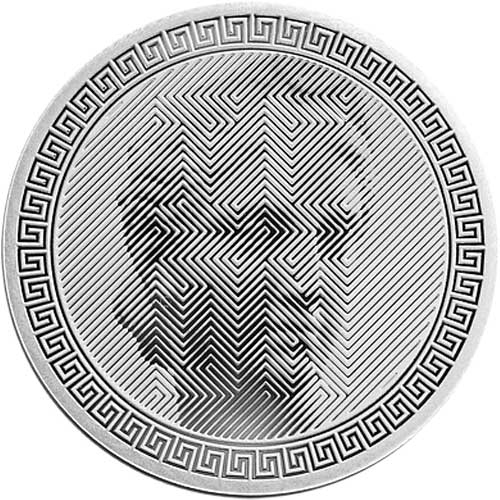 The Silver Tokelau Icon Series is one of the newest for the small Pacific Ocean nation from the Pressburg Mint. The Pressburg Mint is located in Bratislava, Slovakia, and calls on some 400 years of history of coining in the region with its production of modern silver coins for sale. Tokelau series offer investors a BU option, with proof-like options for collectors. Now, 2020 1 oz Silver Tokelau Icon Coins are available to you for purchase online at Silver.com.

The word “icon” has many meanings that have evolved over time and can vary from one culture and language to the next. In Ancient Greece, the word referred to an image. In many cases, that image was often a religious work of art that represented either a famous person directly or was used to refer to a characteristic of a famous person or an item of importance.

In this coin design, the feminine statue known as Diana is featured along with the word “icon.” Diana was a statue sculpted by Hiram Powers in 1853. Powers was a neoclassical sculptor born in the United States in 1805. He created his Diana statue for Lucius Manlius Sargent and used a previous bust of America that he had designed as inspiration for the Diana figure. The major changes to Diana from the America bust included altered drapery on her figure and a moon with stars on the tiara she wears.

The obverse side of the 2020 1 oz Tokelau Icon Coins includes a depiction of Queen Elizabeth II. In this right-profile bust, Her Majesty is shown wearing the Girls of Great Britain and Ireland Tiara on her head. Between the inscriptions at the top and bottom of the design field is the Maori icon of the Koru symbol.

On the reverse field of 2020 1 oz Silver Tokelau Icon Coins is a bust of the Diana figure. Her face is featured in slight right-profile relief with the stars-and-moon tiara visible on her head. The word “ICON” is imposed above her image with “IC” stacked above “ON.” As you change the angle of viewing, you will either see Diana’s figure more clearly or the word “ICON.”

These 2002 1 oz Silver Tokelau Icon Coins are available to purchase new with proof-like visuals. The coins are housed individually inside of protective capsules. The proof-like specimens have evidence of frosted designs and mirrored fields.

Silver.com customer service is available to assist you with questions at 888-989-7223. We are also available online using our live chat and email address features.