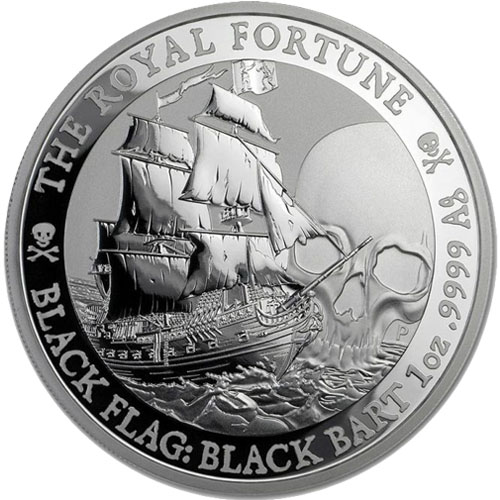 From the 1650s to the 1730s, the world lived through what was known as the Golden Age of Piracy. Empires around the world were expanding across oceans with the power of ever-larger sailing vessels extending the reach of nations by thousands of miles. However, sailing ships could never be everywhere at once, and pirates often stepped into the void to prey on merchant vessels. Among the most successful pirates of this era was a Welshman known as Bartholomew Roberts. Today, 2020 1 oz Silver Tuvalu Black Flag The Royal Fortune Coins are available to you online at Silver.com.

Operating in the Caribbean and off the Gold Coast of Western Africa, Bartholomew Roberts is credited with having captured more than 400 other vessels during his piracy career. Between 1719 and 1722, Black Bart directed his flagship The Royal Fortune throughout the Caribbean and across the Atlantic to the Gold Coast of Africa in search of fame and fortune. Black Bart was known for dressing in his finest clothes before heading into battle, including his final battle in which he lost his life.

All of the 2020 1 oz Silver Tuvalu Black Flag The Royal Fortune Coins in this listing come to you inside of protective plastic flips. With a limited mintage of only 15,000 coins and an impressive silver purity of .9999 fineness, the coins of the Black Flag Series are a great investment.

On the obverse of 2020 Silver Tuvalu Black Flag The Royal Fortune Coins is Queen Elizabeth II. Her Majesty features here in a right-profile portrait that was initially developed for the Royal Mint of England in 1998 by Ian Rank-Broadley. The design showcases the Queen wearing her favorite tiara, the Girls of Great Britain and Ireland Tiara.

The reverse side of the 2020 1 oz Silver Black Flag The Royal Fortune Coin depicts the famed ship of Black Bart. Opposing vessels often spotted Black Bart’s ship flying the infamous skull and crossbones. In fact, he is credited with having designed the skull-and-crossbones flag, along with countless other variants flown by ships in his charge.

Please contact Silver.com if you have any questions about silver for sale. Our team can assist you at 888-989-7223, online using our live chat, and via our email address.