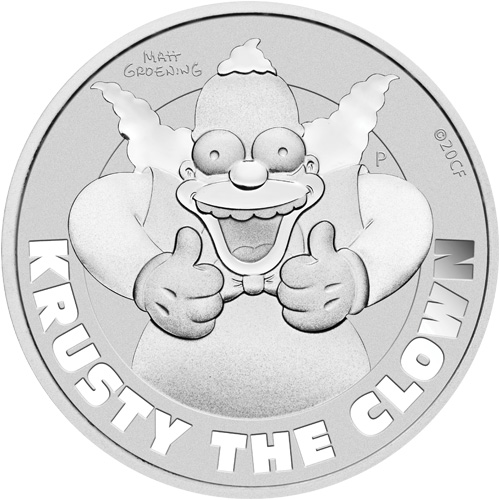 The silver for sale in the Perth Mint’s collection of Simpsons-themed coins includes a new, unique collectible option. One of the most prominent characters in the animated series, Krusty is the son of a devout Jewish rabbi, and those his own faith is on display throughout the history of the show, Krusty certainly doesn’t live the devout life himself. Now, 2020 1 oz Silver Tuvalu The Simpsons Krusty The Clown Coins are available to you for purchase online at Silver.com.

Krusty the Clown was born as Herschel Shmoikel Pinchas Yerucham Krustofsky, the son of Rabbi Hyman Krustofsky, who also makes several appearances within the series. Krusty is the biggest celebrity in Springfield and is the second-richest citizen of the town behind the crotchety old Mr. Burns.

On television, Krusty is the happy-go-lucky clown who entertains children in his studio audience and those watching on TV. From hacky skits to crude jokes, Krusty always has them laughing. To top it all off, Krusty is always embellishing on his own laughter. When the cameras are off and Krusty is backstage or generally out of the public eye, he is a very different man.

The reverse of the 2020 1 oz Silver Tuvalu The Simpsons Krusty The Clown Coin features a depiction of Krusty the Clown as viewers see him during his television show. However, when the cameras are off, Krusty is often portrayed as a sad individual who can’t stand the constant attention of his show. In other scenes, when he is at home alone, you get a glimpse into how the excesses of his rich lifestyle further dampen his mood as he is often shown to be a heavy drinker.

On the obverse of 2020 1 oz Silver Tuvalu The Simpsons Krusty The Clown Coins is Queen Elizabeth II. This is the fifth-generation effigy of the Queen featured on Australian and other Commonwealth denominations in the South Pacific. It was created in 1998 by Ian Rank-Broadley and depicts the Queen in right-profile relief with the Girls of Great Britain and Ireland Tiara on her head, a tiara known to be her favorite.

These 2020 1 oz Silver Tuvalu The Simpsons Krusty The Clown Coins are available to purchase today in Brilliant Uncirculated condition. The coins arrive in protective plastic capsules.

Silver.com customer service is available to you at 888-989-7223. You can also chat with us live online or simply send us an email with your inquiries.