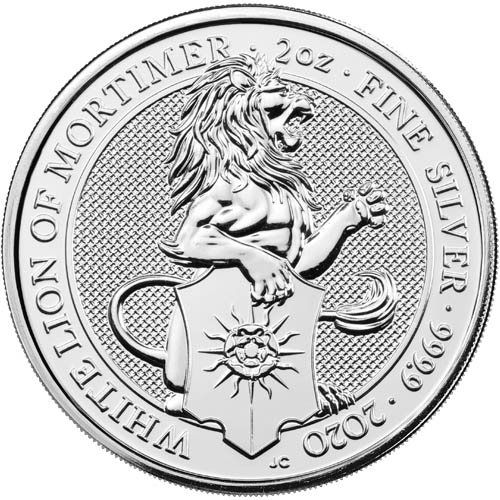 The White Lion of Mortimer comes to Queen Elizabeth II through the first Yorkist King of England, King Edward IV. The White Lion was used by Edward IV to support his Royal Arms and features as the eighth overall design in the Queen’s Beast Series from the Royal Mint of England. Today, 2020 2 oz Silver British Queen’s Beast White Lion Coins are available to you online at Silver.com.

All 2020 2 oz Silver British Queen’s Beast White Lion Coins are available to you in Brilliant Uncirculated condition. The coins ship to you individually inside of a protective plastic flip and in multiple options. Those multiples include mint tubes of 10 coins or Monster Boxes of 200 coins with a total of 20 tubes.

On the obverse of 2020 Silver British Queen’s Beast White Lion Coins is a depiction of Queen Elizabeth II. Her Majesty is depicted here in right-profile relief in a fifth-generation portrait created in 2015 by Jody Clark. Elizabeth II’s father, King George VI, often used the shield of the House of York as his personal badge before he was crowned king. At this time he held the title of Duke of York.

Please feel free to reach out to Silver.com if you have questions about silver for sale. You can call us at 888-989-7223, chat with us live online, or email us directly.