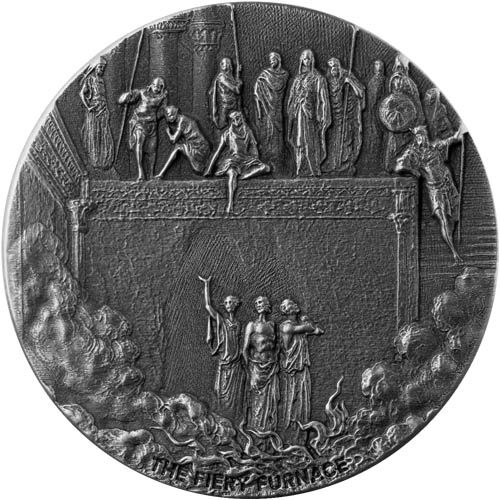 Special introductory pricing is available for a limited time!

One of the primary tests of a person’s faith is their unwavering belief in and worship of just one God. Hebrews and Christians alike believe there is just one God in this world and that faith in him delivers righteous results. In the Book of Daniel, readers hear at least two tales of people whose faith in God was tested and rewarded. Now, 2020 2 oz Silver Fiery Furnace Biblical Series Coins are available to you for purchase online at Silver.com.

In the Book of Daniel, chapter 3, readers encounter the story of three Hebrew men at the court of King Nebuchadnezzar II in Babylon. The King of Babylon believes he is a divine entity chosen by his gods as a representative and ruler on Earth. When he asks these Hebrew men to bow down to him and they refuse, he condemns them to death by fire.

The three men are cast down in a fiery furnace to be burned alive. Because the men ignored Nebuchadnezzar’s request and maintained their faith in the one, true God, they were spared a grisly death in the flames. As the heat, smoke, and flames rose around them, an angel appeared at their side to protect them from death. Nebuchadnezzar himself is said to have seen the angel, stating that he saw the three men preserved within the flames while a fourth man, “like a son of God” stood nearby.

Queen Elizabeth II is depicted on the obverse face of 2020 2 oz Silver Fiery Furnace Biblical Series Coins. This is the third-generation effigy from British currency and was designed in 1985 by Raphael Maklouf. It features the Queen in right-profile relief with the George IV State Diadem Crown on her head.

The Babylonians look on at the three men in the fiery furnace in the reverse design of 2020 Silver Fiery Furnace Biblical Series Coins. As the flames rose around the men, their continued faith in God alone saved them from death, and as Nebuchadnezzar looked on, he reported seeing a fourth figure with the men in the fire whom he described as “like a son of God.”

These 2020 2 oz Silver Fiery Furnace Biblical Series Coins are available to you for purchase online with beautiful antique polish applied to rimless blanks. The coins are individually housed in Bible-inspired books with a numbered Certificate of Authenticity. Each coin has its own, unique serial number etched onto its outer edge.

Silver.com customer service is happy to field your calls about buying silver at 888-989-7223. We are also available to you online using our live chat and email address features.