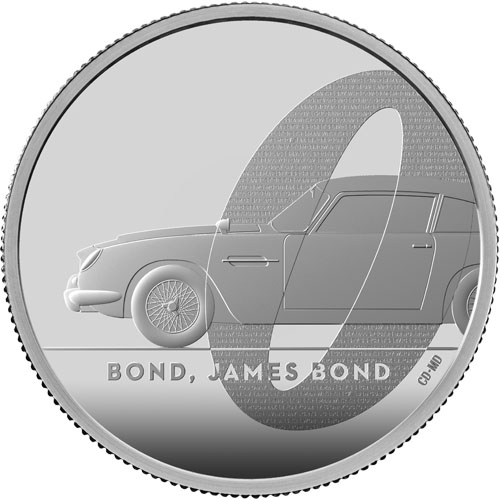 The Royal Mint of England is a fitting issuer of James Bond bullion silver coins. The fictional secret agent was created by author Ian Fleming in a series of books that first debuted in 1952. Since 1962, 24 James Bond feature films have been produced, making it one of the longest-running film series in world history. Today, 2020 2 oz Proof Silver British Bond, James Bond Coins are available to you online at Silver.com.

Fleming created the character James Bond as a suave, intelligent, sophisticated MI6 secret agent who can use his smarts and his brawn in equal amounts to defeat evil. A total of six men have portrayed James Bond since 1962, with Sean Connery taking on the leading role for six of the first seven films. Roger Moore depicted Bond the most with a total of seven films between 1971 and 1985. Daniel Craig will soon reprise the role for a fifth time, putting him just behind Connery and closing the gap on Moore.

All of these 2020 2 oz Proof Silver British Bond, James Bond Coins are available to you with protective capsules and commemorative display boxes from the Royal Mint of England. Each coin also comes with a Certificate of Authenticity that includes the story on the inspiration behind the reverse design. These coins are proof specimens with frosted designs and mirrored fields.

Queen Elizabeth II is depicted on the obverse of the 2020 2 oz Proof Silver British Bond, James Bond Coins. Designed by Jody Clark, this image appeared first on 2016 date-marked coins and is the fifth-generation effigy of the Queen to appear on coins. The Queen is depicted in right-profile relief wearing the George IV State Diadem Crown commissioned in 1820 during the first year of George IV’s reign.

An Aston Martin DB5 remains as one of the most iconic symbols of the tools and toys that James Bond uses when confronting evildoers. The Aston Martin featured here on the 2020 2 oz Proof Silver British Bond, James Bond Coins is shown alongside a large “0” from “007.” Micro-text within the number includes the titles of all 25 films produced in the James Bond franchise.

Please feel free to contact Silver.com with your questions. You can contact us on the phone at 888-989-7223, online through our live chat, and via our email address.