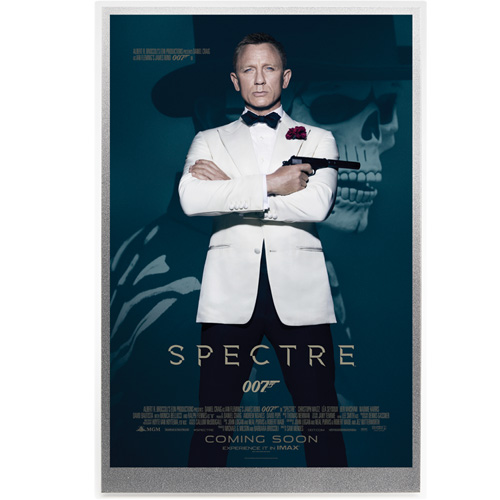 There are a total of 27 feature films depicting the British secret agent James Bond. 25 of those feature films were produced by Eon Productions, with its 24th film Spectre. The film debuted in 2015 and was the fourth of five to feature Daniel Craig in the role of James Bond. Today, 2020 5 Gram Silver Australian James Bond Movie Poster Spectre Foils are available to you online at Silver.com.

Spectre was a distinctive release in the series as it marked the first time in two decades that the character of M was played by someone other than actress Judi Dench. When the James Bond feature film franchise returned in 1995 with GoldenEye, Robert Brown did not return to the role of M. The directors’ cast actress Judi Dench in the role, making her the first and to-date only woman to play the part. Dench debuted in GoldenEye and appeared as M in every film with the character through 2012’s Skyfall.

All of 2020 5 Gram Silver Australian James Bond Movie Poster Spectre Foils available in this product listing come to you with distinctive packaging from the Perth Mint. The silver foils are housed individually in a clear Perspex case that can be mounted directly on the wall for display or set within the base of the included black presentation box. All foils come with the case and box inside of a themed shipper.

The obverse of the 2020 Silver Australian James Bond Movie Poster Spectre Foils comes with a depiction of the 007 logo. The 007 logo has featured throughout the film franchise and is commonly found within the opening sequences of the film during the initial credits.

On the reverse field of 2020 5 Gram Silver Australian James Bond Movie Poster Spectre Foils is a depiction of the full-color movie poster from the release of Spectre. The design shows Bond wearing a white tux with his arms crossed and his pistol at the ready in his right hand. Sam Mendes directed a second consecutive Bond film with the release of Spectre, marking the first time since John Glen that a director had taken the helm for more than one film. Mendes worked on Skyfall and Spectre, while Glen directed five films in a row from 1981 to 1989.

Please contact Silver.com customer service if you have any questions when buying silver. Our team is available to assist you on the phone at 888-989-7223, on the web using our live chat, and via our email address.