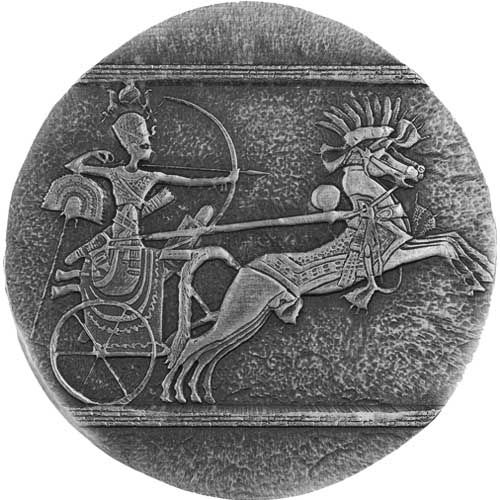 The Egyptian Relic Series from the Scottsdale Mint is a popular item with collectors. Attention to detail is the name of the game in this series, with unique designs on the obverse for each issue and hand-brushed antiquing, these coins are a great addition to any collection. Now, 2020 5 oz Silver Republic of Chad Egyptian Relic Series Chariot of War Coins are available to you for purchase online at Silver.com.

Chariots played a central role in the early rise of Egypt as a military power in the ancient world. The Egyptians successfully employed chariots on the field of battle as a platform for archers. Although chariots were expensive and time-consuming to make, and prone to breakdowns, the horse-drawn chariot was considered more effective for archers.

The alternatives at the time were to employ archers on horseback, which did not provide the stability required for continuous, effective fire. Additionally, archers could be deployed on foot in lines at the back of the army, but any rear attack would leave them vulnerable to a slaughter. Chariots offered mobility, protection, and stability to archers and were often the spearhead of any Egyptian attack in battle.

The obverse of 2020 5 oz Silver Republic of Chad Egyptian Relic Series Chariot of War Coins comes with a depiction of an archer riding in a horse-drawn chariot. The chariot may have been a popular weapon of war, but it was also widely embraced in Egyptian society. It was prominent in Egyptian art and the famed King Tutankhamun was even buried with six dismantled chariots in his tomb.

On the reverse side of 2020 5 oz Silver Egyptian Relic Series Chariot of War Coins, you will find the national coat of arms for the Republic of Chad. The crest is topped with a rising sun and supported by a goat on the left and a lion on the right. The wavy lines on the shield represent Lake Chad.

These 2020 5 oz Silver Republic of Chad Egyptian Relic Series Chariot of War Coins are available to you with a beautiful gift box. The box has protective housing to hold the coin and comes with hieroglyphs on the lid.

Silver.com customer service is available to assist you with questions about silver for sale at 888-989-7223. We are also available to you online through our live chat and email address features.