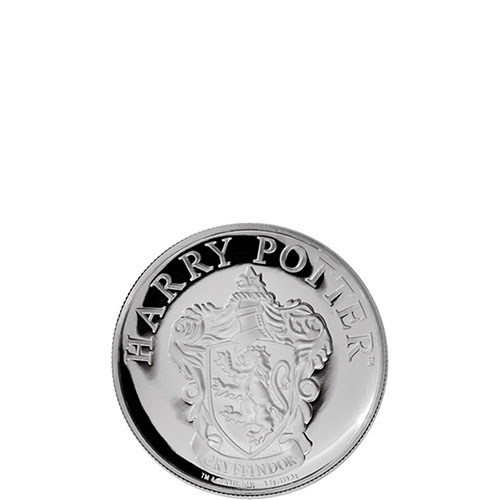 Gryffindor is a student house at Hogwarts School for Witchcraft and Wizardry that is home to the main protagonists of the series. Harry Potter, Ron Weasely, and Hermione Granger were all residents of Gryffindor throughout the series. Founded by one of the four founders of Hogwarts, Gryffindor is depicted among the house crests in the new School Crest of Wizardry Series. Today, 2020 9.5 Gram Silver British School Crest of Wizardry Series Gryffindor Coins are available to you online at Silver.com.

Gryffindor was founded by Godric Gryffindor, one of the four founding instructors of Hogwarts School of Witchcraft and Wizardry. Godric valued courage, bravery, and chivalry among the student residents of the house. The mascot for the house is a lion and its house colors are scarlet and gold.

All of the 2020 9.5 Gram Silver British School Crest of Wizardry Series Gryffindor Coins are available to you with proof visuals and individually packaged. The coins are packaged inside of white presentation cards that have their own design visuals separate of those from the coins. The reverse of the coin aligns with the primary face of the card that has a full-color image of the House Gryffindor quest. The back side of the card is aligned with the obverse of the coin, offers a Certificate of Authenticity, and comes with a stand to prop the coin upright.

On the obverse side of all 2020 9.5 Gram Silver British School Crest of Wizardry Series Gryffindor Coins is a depiction of Queen Elizabeth II. This bust of the Queen is shown in right-profile relief with the Queen wearing the George IV State Diadem Crown. Part of the official Crown Jewels, the crown was designed and commissioned during the first year of the reign of King George IV.

Please contact Silver.com with your questions about buying silver. You can reach us on the phone at 888-989-7223, chat with us live online, or email us directly.