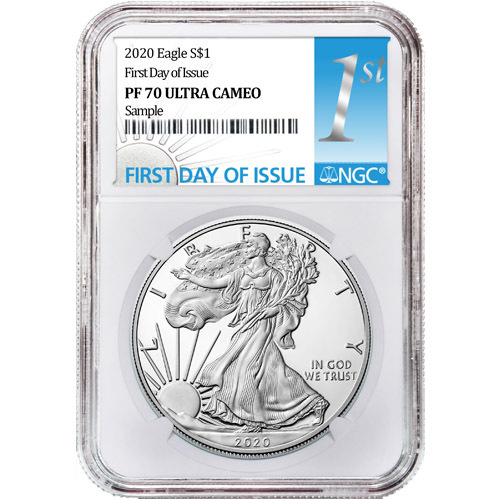 Introduced in 1986, the Proof Silver Eagle has been struck in nearly every year since its debut. The BU and Proof coins have been available since 1986, with 2009 being the only year in which the Proof Silver Eagle was not struck. Demand for silver bullion blanks at that time and the US Mint’s obligation to strike BU coins forced it to suspend both the Proof and Burnished coins in 2009.

The highest mintage the Proof Silver Eagle ever experienced came in 1986. Its debut release featured a total mintage of just over 1.4 million coins. The next highest mark came in 2006 when the 20th-anniversary release sold roughly 1.09 million coins. These are the only two date marks ever to surpass 1 million in the history of the series.

The obverse of the 2020-W Proof Silver American Eagle features an effigy of Lady Liberty. Known as Walking Liberty, this design was created in 1916 by Adolph A. Weinman and was first used on the US Half Dollar from 1916 to 1947.

On the reverse side of 2020-W 1 oz Proof Silver Eagles is a depiction of the heraldic eagle of the United States. This image of the bald eagle includes the US national shield, the arrows of war, the olive branch of peace, and a triangular cluster of 13 stars over the eagle’s head.

These 2020-W 1 oz Proof Silver American Eagles are available in perfect condition. Coins earn a PF70 grade when they showcase full, original mint luster and no detracting flaws. UCAM specimens are proof coins with strong, frosted designs and deeply-mirrored, clear fields. First Day of Issue designations are for coins received by the NGC within 24 hours of the initial release date.