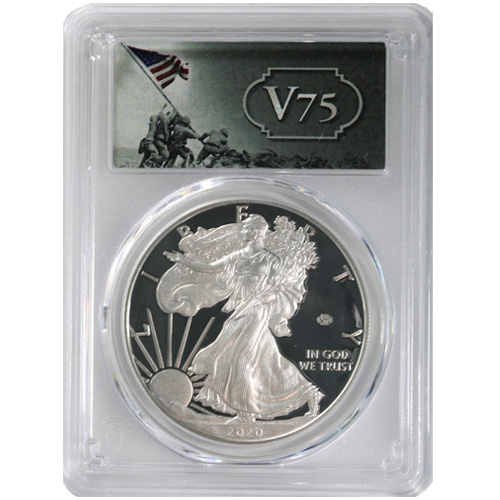 The coins in this release had an original mintage of only 75,000 silver coins, a commemorative mintage set to honor the 75th anniversary of the conclusion of World War II. The privy mark is found on the obverse side of the coins and shaped like the Rainbow Pool, a reflecting pool in Washington D.C. so-named because its 124 water jets create a perfect rainbow in the mist. The National World War II Memorial was built around the Rainbow Pool when it was constructed between 2001 and 2004.

Inside of the privy mark is an inscription of “V75” to honor the victory of the Allies over the Axis Powers in World War II. The war came to a conclusion in Europe in May 1945, with the US and its Pacific-theater Allies achieving victory over Japan by August 1945.

The obverse of 2020-W V75 Privy Proof Silver Eagles features Walking Liberty. This depiction of Liberty captures her entire figure in left-profile relief as she walks toward the sun on the horizon with the American flag draped over her figure.

On the reverse side of 2020-W 1 oz V75 Privy Proof Silver American Eagles is the heraldic eagle of the United States. This iconic design was modernized in 1986 by John Mercanti for this series and depicts the bald eagle in support of the US national shield. The eagle holds the arrows of war and the olive branch of peace in its talons.

These 2020-W 1 oz V75 Privy Proof Silver American Eagles come with a perfect certification. A coin with a PR70 grade from the PCGS showcases full, original mint luster and comes with no detracting flaws of any kind. First Strike specimens are those received by the PCGS within 30 days of the US Mint’s release date for the coins.