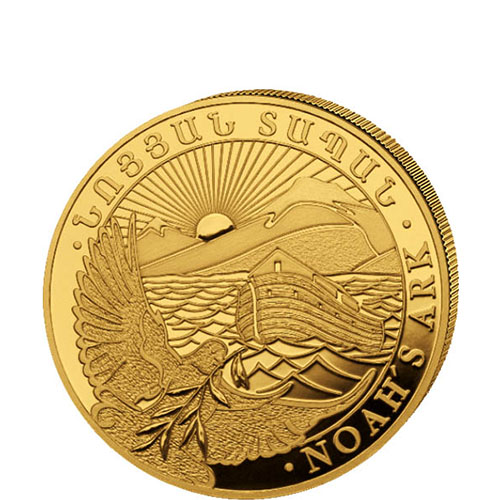 The Armenian Noah’s Ark Series has long been a diverse, low-mintage series of silver coins. The 2011 introduction of the series offered 1 oz, 1/2 oz, and ¼ oz silver coins. 2012 brought more weights to the silver series, but it would be another eight years before the collection gained gold bullion coins. When it did, four distinctive weights were introduced. Today, 2021 1/2 oz Gold Armenian Noah’s Ark Coins are available to you online at Silver.com.

Geiger Edelmetalle, a German mint near Leipzig, Germany, is the mint behind the Armenian Noah’s Ark Series. The mint produces both the silver and gold bullion versions of the coin on behalf of the Central Bank of the Republic of Armenia, the issuing authority behind the coins. The new gold series offers 1 oz, 1/2 oz, 1/4 oz, and 1 Gram gold options to investors. The coins in this series are packaged differently than the silver coins, which are offered individually or in bulk in certain weights.

All of the 2021 1/2 oz Gold Armenian Noah’s Ark Coins are available here in Brilliant Uncirculated condition from the mint. The gold coins in the Armenian Noah’s Ark Series are available to purchase inside of sealed security capsules. These capsules can only be opened by destroying the capsule, offering the highest security for your gold bullion investment. The capsules include a Certificate of Authenticity with individual serial numbers for each of the coins in the 1/2 oz gold release.

On the obverse side of the 2021 Gold Armenian Noah’s Ark Coins is the national coat of arms. The national seal for the Republic of Armenia includes a quartered shield that is supported by a heraldic lion on one side and a heraldic eagle on the other. The quartered shield has lions and eagles in each of the quadrants, with a smaller shield at the center boasting its own vision of Noah’s ark on Mount Ararat.

The reverse face of 2021 1/2 oz Gold Noah’s Ark Coins comes with a depiction of Noah’s Ark. In the Book of Genesis, an angered God sends 40 days and 40 nights of rain to help cleanse the world of its sins. Only Noah, his family, and two of every animal in the world are chosen to survive the storm and flooding. They spent those 40 days and 40 nights in an ark Noah built to God’s specifications. When the rain had stopped, Noah sent out birds to find dry land. When a dove returned with an olive branch, the survivors knew dry land was near at hand.

Please feel free to contact Silver.com with your questions. You can call us at 888-989-7223, chat with us live online, or email us directly.