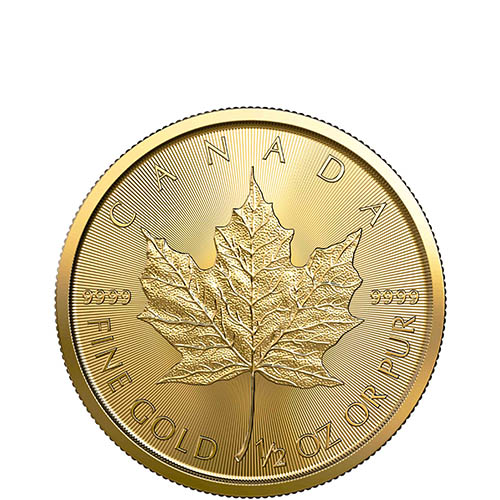 Gold Canadian Maple Leafs are instantly recognizable by investors around the world buying gold. These coins are the official bullion specimens of Canada and are produced annually by the Royal Canadian Mint. Available since 1979, the series expanded several times to add more coin weights. In 1986, this included the debut of a 1/2 oz gold coin in the series.

The subsequent additions in the series started with the 1986 release of the first-ever 1/2 oz Gold Maple Leaf. In 1993, the series offered a 1/20 oz gold coin for the first time. 21 years later, the series expanded one more time in 2014 to include a unique 1 Gram gold coin. Today, the series continues with those options each year.

The obverse side of 2021 1/2 oz Gold Canadian Maple Leafs features Queen Elizabeth II. As the reigning monarch of England, she features on the obverse of all Commonwealth coins to include Canadian currency. Her Majesty is shown in right-profile relief in this design created in 2003 by Susanna Blunt.

On the reverse face of the 2021 Gold Canadian Maple Leaf, you will find the sugar maple leaf. The modern image of the maple leaf is based on the iconic 1979 depiction of the natural splendor of the sugar maple leaf created by Walter Ott. This design features on all coins in the series from the six weights in gold to the silver, platinum, and palladium.

These 2021 1/2 oz Gold Canadian Maple Leafs are available to you in Brilliant Uncirculated condition. The coins in this weight are offered individually inside of protective plastic flips or housed inside of the original Royal Canadian Mint sealed sheets of 10 individual 1/2 oz gold coins.

Silver.com customer service is available to help you find answers at 888-989-7223. Alternatively, you can reach out to us on the web using our live chat and email address features.