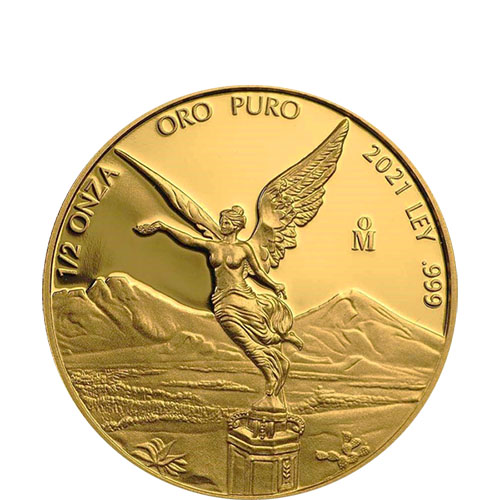 All of these 2021 1/2 oz Proof Gold Mexican Libertads are available to you with beautiful proof visuals. The coins have frosted designs that contrast with the mirrored background fields of the coins. Each one arrives inside an individual acrylic capsule for protection.

The obverse of 2021 Proof Gold Libertads comes with the iconic image of Winged Victory. Her effigy first appeared on Mexican coinage in 1921 when the Mexican Mint issued the Gold Centenario, a 50 Peso commemorative piece that was briefly used in circulation. The original design showed Victory in front-facing relief, while this modern depiction captures her figure in three-quarter profile.

On the reverse side of the 2021 1/2 oz Proof Gold Mexican Libertad is the design of the modern national coat of arms. The Mexican national seal is one of the oldest in the world, as it is still based on the Codex Mendoza symbolism from 1541. Though modernized, it continues to feature a golden eagle on the branch of a prickly pear cactus as it struggles with a serpent.

The Codex Mendoza is linked to Aztec lore. It is said that the Aztec people were told by their gods to found Tenochtitlan, their capital city, on the site where they witnessed a golden eagle devouring a snake. Tenochtitlan’s remains are at the heart of modern-day Mexico City.

Please contact Silver.com with questions about these gold bullion coins. You can call us at 888-989-7223, online using our live chat, and via our email address.