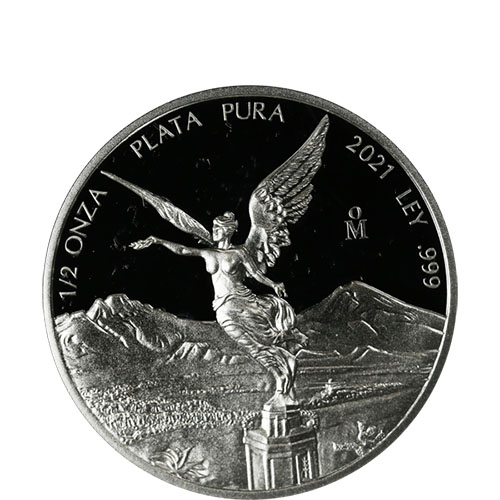 Silver Libertads at the Mexican Mint come in a variety of versions to suit the needs of both investors and collectors. Coins such as the 1 oz silver coin are offered annually in this series with BU, Proof, Antique, and Reverse Proof versions. The 1/2 oz silver coin, the largest of the fractional-ounce silver options, is available annually in either BU or Proof. Now, 2021 1/2 oz Proof Silver Mexican Libertads are available to you for purchase online at Silver.com.

Proof Silver Libertads from the Mexican Mint debuted in 1983 with a one-year issue of a limited number of 1 oz proofs. After a two-year break, the series returned for good in 1986 with the same 1 oz silver option. The program expanded for the first time in 1992 when the Mexican Mint introduced the four fractional-ounce coins, including these 1/2 oz Proof Silver Libertads. This came one year after the BU version of the coins gained the same fractional-ounce weights.

From 1992 to 2011, the four coins in the fractional-ounce range of Proof Silver Libertads more or less had the same mintages each year. For example, from 1992 to 1997, the Mexican Mint assigned the same mintage level to each of the four coins in each year. As the mint moved away from this mintage approach, the 1/2 oz Proof Silver Libertad would prove to be the most popular fractional-ounce coin when demand for silver was high, and less popular when silver demand was low. For example, in 2016 the 1/2 oz Proof Silver Libertad had the highest mintage among the four fractional coins and was just a few hundred shy of surpassing the 1 oz coin as the top-selling option that year.

On the obverse side of 2021 1/2 oz Proof Silver Mexican Libertads is the modern coat of arms for Mexico. Based upon an image from the Codex Mendoza, a 1541 Aztec codex, the seal features a Mexican golden eagle on the perch of a prickly pear cactus battling a rattlesnake.

The reverse field of 2021 Proof Silver Libertads comes with a vision of the statue of Winged Victory. She is based on the Greek goddess Nike, or Roman goddess Victoria, and is a winged figure holding a crown wreath in one hand and a set of broken chains in the other.

Silver.com customer service is available to assist you on the phone at 888-989-7223. You can also chat with us live online or email us.