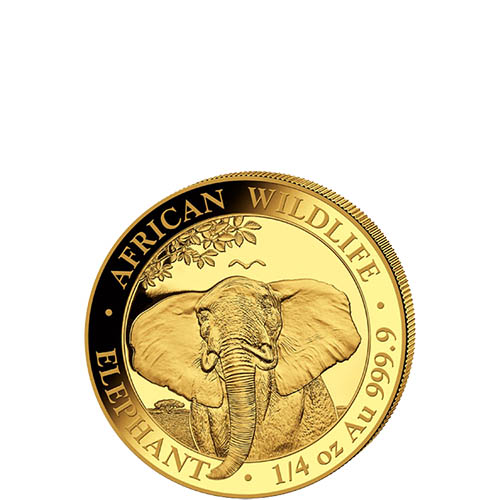 The Gold Somalia Elephant Series is the primary option from the Bavarian State Mint in its African Wildlife Series. Introduced in 1999 as the Zambia Elephant Series, since 2004 the coins have been released on behalf of Somalia. The 2016 release brought with it increased purity in certain coins, a new platinum coin, and additional weights in silver and gold. Now, 2021 1/4 oz Gold Somalia Elephants are available to you for purchase online at Silver.com.

In 1999, the Bavarian State Mint introduced the first coin in its African Wildlife Series. The African bush elephant is the first species to feature in the series and was available as the Zambia Elephants from 1999 to 2003. The coins were initially only available in 1 oz silver and 1 oz gold. In 2004, the series shifted and became known as the Somalia Elephants.

From 2004 to 2015, the coins were available as the Somalia Elephants in gold and silver. In 2016, various changes came to the series. First and foremost, the silver series saw its purity increase from .999 to .9999 fine silver. The silver series gained a number of different weights for the first time, including fractional ounces. The gold coins gained five fractional-ounce options and a Platinum Elephant was introduced for the first time ever.

These 2021 1/4 oz Gold Somalia Elephants are available in Brilliant Uncirculated condition. The coins are packaged individually in protective capsules with multiples of 20 available in acrylic tubes.

Silver.com customer service is available to help answer your questions about buying gold at 888-989-7223. We are also available to assist you on the web through our live chat and email address.