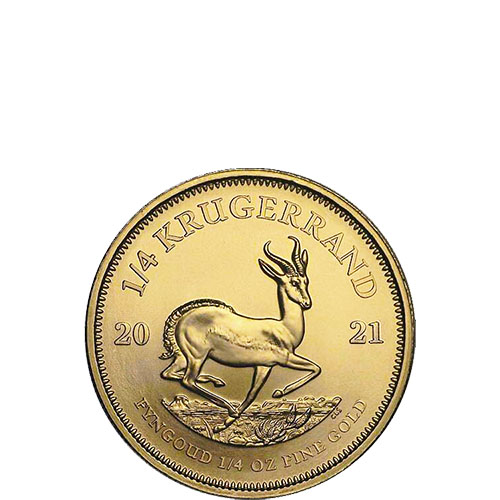 The gold for sale in the Gold South African Krugerrand Series once featured only a 1 oz coin. From 1967 to 1980, the only option available was the coveted 1 oz Krugerrand. In 1980, the continued popularity of the series and demand for gold resulted in the introduction of fractional-ounce coins into the series. Among those coins was the 1/4 oz gold coin.

The Krugerrand Series from the Rand Refinery and South African Mint has gone through three stages of growth during its history. 1967 saw the launch of the series with a 1 oz gold coin available to investors. 1980 saw the introduction of these 1/4 oz gold coins alongside 1/2 oz and 1/10 oz versions of the coin. 2017 was the most recent expansion and saw not only 1/20 oz and 1/50 oz gold coins issued, but also the first-ever Silver Krugerrands.

Silver.com customer service is available to assist you with any questions you have about our products. You can call us on the phone at 888-989-7223, chat with us live online, or email us directly.