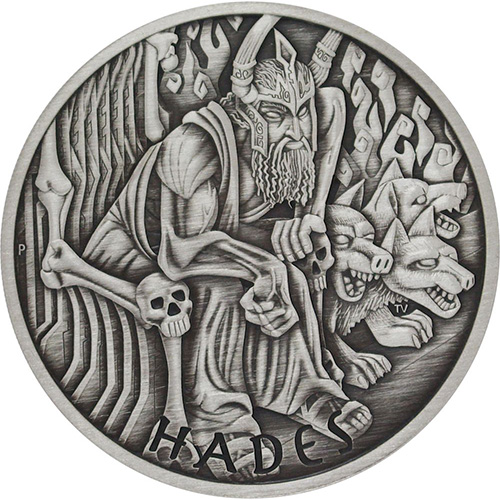 The previous release of these mythological designs came in 2014 and 2015. The gods known as Zeus, Poseidon, and Hades, with these images featured in a three-coin release in 2014. The next year, the Goddess of Olympus collection was released with three additional designs. The featured the images of Hera, Athena, and Aphrodite.

While the 2 oz silver releases in 2014 and 2015 offered high-relief visuals, the new six-coin series introduced in 2020 takes a different approach. Each one of the six designs comes with 1 oz BU and 1 oz antique issues, as well as 5 oz BU and 5 oz antique issues. The 5 oz silver coins come with extremely limited mintages and a Certificate of Authenticity, while the 1 oz coins boast limited mintage figures set slightly higher and do not come with a COA.

Queen Elizabeth II is on the obverse side of all 2021 Antique Silver Tuvalu Gods of Olympus Hades Coins. This visual shows the Queen in right-profile relief wearing the Girls of Great Britain and Ireland Tiara. This beautiful design was created by Ian Rank-Broadley in 1998. It previously featured on British coins from 1998 to 2015, Australian coins from 1999 to 2018, and remains in use on countless Commonwealth Nations.

Hades is depicted in the reverse design of 2021 1 oz Silver Tuvalu Gods of Olympus Hades Coins. This portrait of the God of the Underworld and Ruler of the Dead Shows him seated upon his throne with his faithful, three-headed dog Cerberus at his side.

These 2021 1 oz Antique Silver Tuvalu Gods of Olympus Hades Coins come with a beautiful antique polish and capsules for delivery. These coins have a low mintage of only 1,500 specimens for collectors.