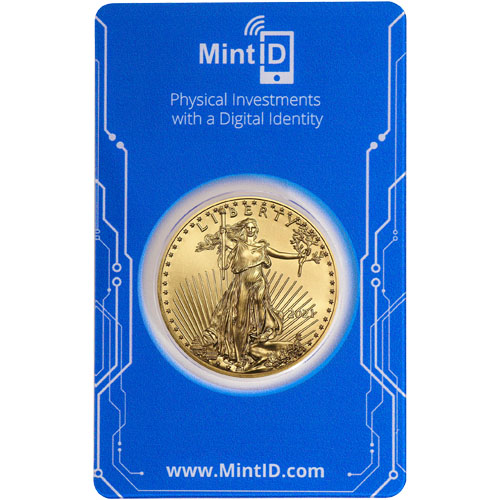 Gold Eagles from the United States Mint have been available since 1986. The US Mint issues the BU Gold Eagle annually to meet the demand of investors with no mintage caps ever applied to the production of the coins. One of the most secure ways to invest in the Gold American Eagle is to purchase one housed in the unique, encrypted MintID CertiCards. Now, 2021 1 oz Gold American Eagles are available to you for purchase online at Silver.com.

For the first time in the history of the Gold American Eagle Series, the United States Mint is making a major change to the designs. In honor of the 35th anniversary of the series in 2021, a new version of the Gold Eagle will debut by midyear that features a fresh take on the bald eagle on the reverse. Until those coins are ready, the US Mint will release the initial 2021 Gold Eagles with the original design from Miley Busiek on the reverse for the final time. This makes 2021 the first and only dual release of Gold Eagles, with the original designs followed by the new design combinations.

The only previous change made to the imagery on the Gold American Eagles came in 1992. From 1986 to 1991, the coins featured date marks in Roman numerals. In 1992, the US Mint transitioned the date marks to Arabic numerals.

The obverse side of 2021 1 oz Gold American Eagles features the Lady Liberty design from Augustus Saint-Gaudens. Created in 1907, this image of Liberty in front-facing relief featured on the Gold $20 Double Eagle from 1907 to 1933.

On the reverse field of 2021 Gold American Eagles depicts a family of American bald eagles. In this design from Miley Busiek, a male eagle is shown flying over the nest with a branch in its talons as a female shelters in the nest with a hatchling.

These 2021 1 oz Gold American Eagles are housed in CertiCards from MintID. These tamper-evident cards have AES 128-bit encryption, making the cards and the coins inside the most secure form of bullion in the world. The encrypted NFC microchip inside the CertiCard allows you to use the MintID app, a free service that requires no personal information, to scan the chip and be instantly connected to the authentication profile for that exact coin stored in the cloud. The MintID app requires iOS 13.0 or later and Android 4.2 or later to run smoothly.

Silver.com customer service is available to assist you with questions at 888-989-7223. Alternatively, you can reach out to us online through our live chat and email address features.