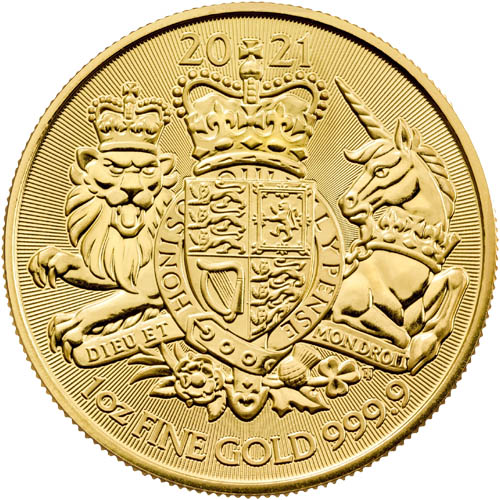 The Royal Arms of England is the official symbol of both the United Kingdom and the monarchy that has reigned over England for more than 1,000 years. Queen Elizabeth II is the current and longest-reigning monarch of England and carries the modern version of the Royal Arms as a symbol of her status as Queen of England. Now, 2021 1 oz Gold British Royal Arms Coins are available to you for purchase online at Silver.com.

The first official Royal Arms was adopted in 1198 during the reign of King Richard I, the second king from the House of Plantagenet. Prior to the rise of the Plantagenets, the Lion was used in various poses as one of the early symbols of the monarchy in England, and even of individual rulers of the separate kingdoms that once existed on the island of Britain.

Richard I, better known as Richard the Lionheart, had previously used images of two rampant lions on his battle emblems and personal badges during the early part of his reign. In 1198, he adopted the well-known Three Lions as the first official Royal Arms of England. This design includes three rampant lions, each one golden in color and set against a field of red. Today, you can still find Richard I’s original Royal Arms in the modern Royal Arms as a symbol of England within the United Kingdom.

Queen Elizabeth II is on the obverse side of the 2021 1 oz Gold British Royal Arms Coins. The Queen is shown here in right-profile relief in the fifth-generation portrait created by Jody Clark. The design shows Her Majesty wearing the George IV State Diadem Crown with a background field boasting a guilloche design element.

Created by Timothy Noad, the modern Royal Arms of England features on the reverse ace of 2021 Gold British Royal Arms Coins. This image includes elements of the monarchy and the United Kingdom. The official heraldic beasts of England and Scotland, the Lion and the Unicorn, support the shield. The shield itself is quartered and has the individual coats of arms for the member nations of the United Kingdom. The Three Lions features twice as a representative of England. The Lion of Scotland and the Harp of Ireland represent the respective nations of Scotland and Northern Ireland.

These 2021 1 oz Gold British Royal Arms Coins are available to you for purchase individually or in multiples. Single coins arrive inside plastic capsules, multiples of 10 coins in mint tubes, or multiples of 100 coins in boxes. All coins are in Brilliant Uncirculated condition.

Silver.com customer service is here to assist you with any questions about gold for sale at 888-989-7223. We are also available online through our live chat and using our email address.