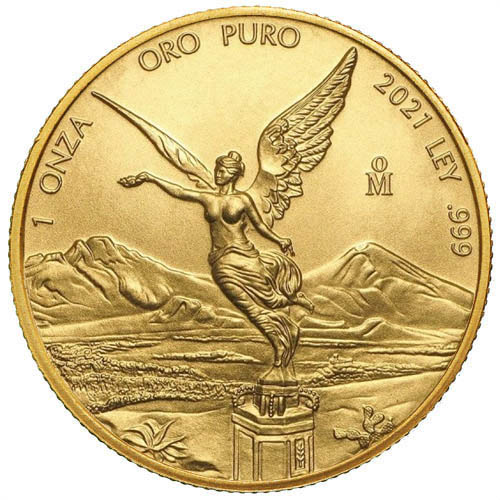 Any quantity available for $0.00 per oz over spot!

Introduced in 1981, the Gold Mexican Libertads are available on an annual basis for investors as of 2002. The designs of the original Gold Libertads were based on the 50 Peso gold Centenario coin. The latter coin was introduced in 1921 to mark the centennial of Mexico’s independence from Spain, and its beautiful designs were revived in 1981 for the debut of the Gold Libertad.

To celebrate 100 years of independence from Spanish colonial rule, the Mexican Mint introduced a 50 peso gold coin. Known as the Centenario, this 50 peso gold coin was introduced as a circulation gold piece in 1921 and available through the early 1940s. Increasing demand for gold during World War II resulted in the coins being reintroduced in 1947 and being issued through 1972. When the Mexican Mint introduced a new gold bullion coin series in 1981, the Centenario designs were revived.

All of the 2021 1 oz Gold Mexican Libertads available in this product listing at Silver.com come with either individual plastic flips or tubes of 10 gold coins. These coins are all available to you in Brilliant Uncirculated condition.

The coins of the Mexican Libertad Series are similar to the South African Krugerrand. Both coins are considered legal tender in the nation of issue, but neither of the coins has an actual face value assigned to the coin or marked on the surfaces.

On the obverse of the 2021 1 oz Gold Mexican Libertad is a depiction of Winged Victory. This figure dates back to Mexico’s revolution against Spain. It depicts the goddess Victoria, a figure often worshipped in the ancient world by victorious generals. She is shown in this design in left-profile relief with a crown wreath in her right hand and broken chains in her left hand.

Please don’t hesitate to contact Silver.com if you have any questions about these gold coins for sale. We are available on the phone at 888-989-7223, online using our chat service, and via our email address.