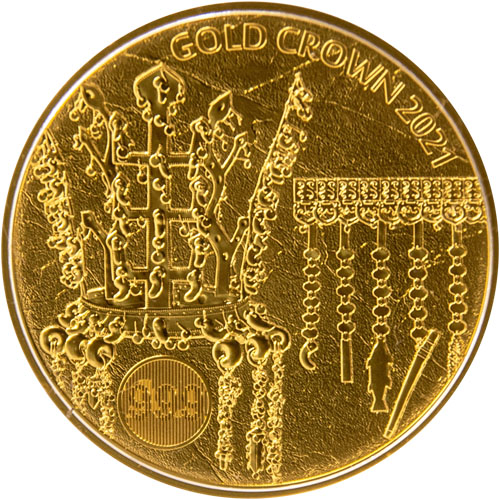 KOMSCO’s stable of silver and gold bullion medals launched in 2016 with designs in the collections known as Chiwoo Cheonwang and Korean Tiger. In 2019, KOMSCO introduced a new series honoring the centuries-old Silla dynasty and the remarkable relics from this bygone kingdom that once ruled the Korean peninsula. Now, 2021 1 oz Gold South Korean Crowns are available to you for purchase online from Silver.com.

The obverse of 2021 1 oz Gold South Korean Crowns features an image of National Treasury No. 87. One of the lasting relics of the Silla dynasty, more than 1,000 years after its downfall, were the gold crowns of its rulers. Several of these have been discovered and are held as National Treasures in the Republic of Korea. This particular design shows the Geumgwanchong crown, the largest gold crown from the Silla kingdom ever discovered.

On the reverse side of 2021 1 oz Gold Crowns is a depiction of Sam jok-o. A mythical bird, this three-legged crow dates back to 5000 BCE when motifs and totems depicting a bird as a Sun god were used in the cultures in the lower Yangtze River delta.

These 2021 1 oz Gold South Korean Crowns are available to you with protective plastic capsules for individual medals. Multiples of 10 encapsulated medals arrive together in sealed rolls. All medals are in Brilliant Uncirculated condition.