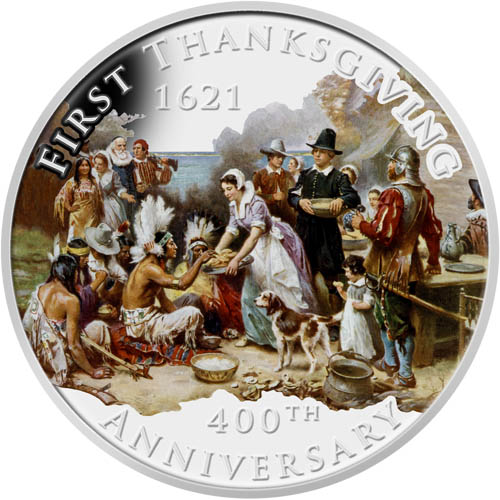 Beginning around the time of the Protestant Reformation in Europe, annual festivals to give prayer and thanks for achievements became commonplace. These events were often held when a good harvest was collected or a nation or kingdom enjoyed victory in battle. When the Pilgrims came to the New World, they brought with them the days of thanksgiving that became popular during the English Reformation under King Henry VIII. The first of these celebrations in the New World occurred 400 years ago in 1621. Now, 2021 1 oz Proof Colorized Silver First Thanksgiving 400th Anniversary Coins are available to you for purchase online from Silver.com.

The tradition of giving thanks in England, the home of many of the Pilgrims living in the Plymouth Colony, arose during the period of the English Reformation. As part of the English Reformation, the number of holidays on the calendar was drastically slashed. While England as a part of the Catholic Church had 95 Church holidays and all 52 Sundays as observable holidays, England after the reformation was much different.

Obverse visuals on these 2021 1 oz Proof Colorized Silver First Thanksgiving 400th Anniversary Coins include a colorized depiction of the first recorded Thanksgiving meal in the New World. In October 1621, some 53 Pilgrims and 90 Wampanoag indigenous figures. This colorized field shows the indigenous figures and Pilgrims in realistic colors to bring the scene to life.

Reverse designs on 2021 Proof Colorized Silver First Thanksgiving 400th Anniversary Coins depict the arrival of the Pilgrims in what is now Massachusetts. As an indigenous Wampanoag individual looks on, Pilgrims row ashore from the Mayflower.

These 2021 1 oz Proof Colorized Silver First Thanksgiving 400th Anniversary Coins are available to you for purchase with individual capsules and a Certificate of Authenticity. In addition to the colorized reverse visuals, the coins are proof specimens with frosted designs and mirrored fields.

Silver.com customer service is available to you at 888-989-7223. Additionally, you can chat with us live online or email us directly.