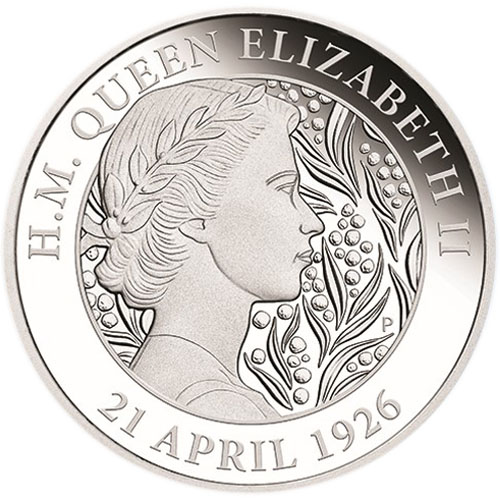 There is no shortage of titles held by England’s Queen Elizabeth II. While the most impressive are those such as Queen of England, head of the Commonwealth, and Queen Regnant, she holds a number of titles that honor her longevity on the throne of England. 2021 marks her 95th birthday as she approaches her 70th year on the throne. Now, 2021 1 oz Silver Proof Australian HM Queen Elizabeth II 95th Birthday Coins are available to you for purchase online at Silver.com.

Queen Elizabeth II was born as Elizabeth Alexandra Mary Windsor on April 21, 1926. The eldest child of King George VI, she would later ascend to the throne of England in February 1952 when her father died. In the decades that have passed, Queen Elizabeth II has gone on to become arguably the most memorable monarch in British history.

The obverse of 2021 1 oz Silver Proof Australian HM Queen Elizabeth II 95th Birthday Coins features a depiction of Her Majesty by Jody Clark. The design was created in 2015 for the Royal Mint and debuted on Australian coins from the Perth Mint in 2018.

On the reverse side of the 2021 Silver Proof Australian HM Queen Elizabeth II 95th Birthday Coins is an image of the Queen from the first year of her reign. This iconic design shows a young Elizabeth II in right-profile relief with a simple wreath crown on her head.

These 2021 1 oz Silver Proof Australian HM Queen Elizabeth II 95th Birthday Coins are available to purchase with beautiful displays. The coins ship in clear displays with a themed shipping sleeve that honors the Queen’s 95th birthday. Each one also comes with a numbered Certificate of Authenticity.