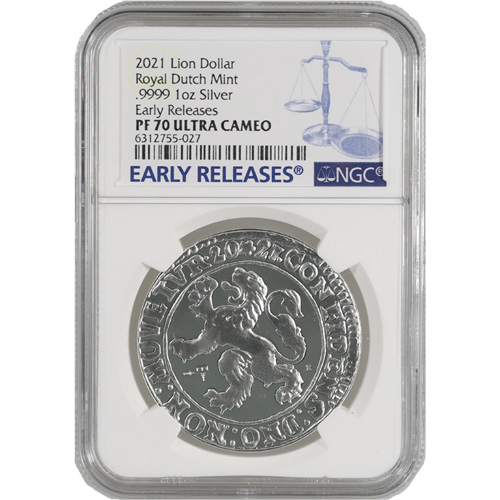 Introduced in 2017, the Silver Netherlands Lion Dollar Series revives one of the oldest designs from the Royal Dutch Mint. Beginning in the 16th century, the various Dutch provinces began issuing silver dollars using the image of the Dutch Lion from the kingdom’s heraldic seals. These silver coins went on to become a well-known form of international currency throughout the 16th, 17th, and 18th centuries. Now, 2021 1 oz Proof Silver Netherlands Lion Dollars are available to you for purchase online from Silver.com in perfect condition.

The first Dutch Lion Dollars were issued in 1575, just eight years after the Utrecht Mint was founded. The coins all featured an image of the Dutch Lion from the heraldic symbolism of the kingdom, but each province had its own twist on what the Dutch Lion would look like on the silver dollars.

The obverse side of 2021 1 oz Proof Silver Netherlands Lion Dollars features a depiction of the Dutch Lion of Overijssel. This design shows a rampant lion in left-profile relief with shaggy fur on the coat of the beast. This is the only side of the coin with an inscription and it includes the date mark and the motto of the United Provinces. That motto translates into English as Who trusts in the Lord is not moved.

On the reverse of 2021 Proof Silver Netherlands Lion Dollars is a common design element featured throughout this series. It shows a Dutch knight in the top-half of the design field with the Dutch coat of arms below. This shield is the coat of arms for both the modern Netherlands and the province of Holland, and it shows a rampant lion.

These 2021 1 oz Proof Silver Netherlands Lion Dollars are PF70 coins with plastic slabs. A perfect specimen, each coin showcases full, original mint luster with no detracting flaws. Ultra-cameo proofs are those coins with strong, frosted designs and deeply-mirrored, clear fields. Early Release designations are for coins received by the NGC within 30 days of release from the mint.

Silver.com customer service is available at 888-989-7223. Alternatively, we are available to you online using our live chat and email address features.