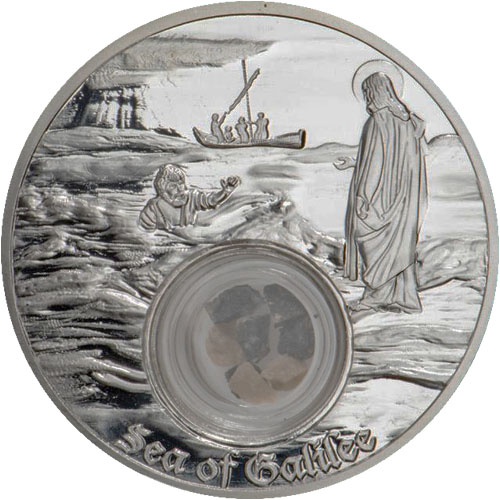 The Sea of Galilee is one of the central settings in the New Testament of the Christian Bible. It is here that the ministry of Jesus begins to take shape, and it is here where he performs many of the miracles attributed to his actions. Among those, the moment when Jesus walks out on the water of the Sea of Galilee to rescue Peter and unite with his disciples on a fishing boat. Now, the 2021 1 oz Proof Silver Niue Footsteps of Jesus Sea of Galilee Coins are available to you for purchase online at Silver.com.

A great deal of the ministry of Jesus occurs along the banks of the Sea of Galilee. In the Gospels of Matthew, Mark, and Luke, you will find mentions of Jesus recruiting apostles from the shores of a lake known as Kinneret, another name often used for the Sea of Galilee in previous eras. Those men were the fisherman Simon, his brother Andrew, and the brothers John and James.

Among the many miracles attributed to Jesus and his ministry that took place near the Sea of Galilee are the Sermon on the Mount, his calming of a storm on the sea as his disciples panicked, the miraculous haul of fish after a day of no catches, his third appearance after the resurrection, and the moment he walked on the water out to his disciples.

On the obverse of 2021 1 oz Proof Silver Niue Footsteps of Jesus Sea of Galilee Coins is a bust of Queen Elizabeth II. This right-profile portrait with the Girls of Great Britain and Ireland Tiara on the Queen’s head was created by Ian Rank-Broadley for the Royal Mint of England in 1998. It has been widely used throughout the Commonwealth since that time.

The reverse face of the 2021 Proof Silver Niue Footsteps of Jesus Sea of Galilee Coin comes with an image of Jesus walking on the water on the Sea of Galilee. The miracle of Jesus walking on the water comes on the night following his miracle of feeding five thousand people with a single fish. The disciples left Jesus on the eastern shore of Galilee and rowed back to the western shore. Caught in a storm, Jesus walked out upon the water toward his disciples. Believing they were seeing a spirit, the men became afraid. Peter even leapt into the water to swim out to Jesus. After he told them not to be afraid, they were calmed. Once Jesus entered the ship, the wind ceased and the rowing was easy the rest of the way to shore.

These 2021 1 oz Proof Silver Niue Footsteps of Jesus Sea of Galilee Coins are available to purchase with capsules and a black presentation box. There is also a Certificate of Authenticity available with purchase. Each coin also has an inset capsule with rocks taken from the shores of the Sea of Galilee.

Silver.com customer service is here to answer your questions about silver for sale at 888-989-7223. Alternatively, you can connect with us online through our live chat and email address features.