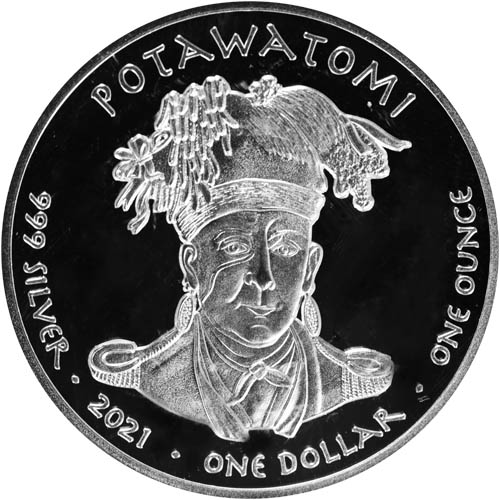 Introduced in 2015, the Native American Mint and Jamul Sovereign Nation have continuously struck new designs in the Proof Silver Dollar Series. This long-running collection offers new obverse and reverse designs with each release as it tries to chronicle the history of and honor the various tribes that originally called the North American continent home. Now, 2021 1 oz Proof Silver Wisconsin Potawatomi American Badger Coins are available to you for purchase online at Silver.com.

The Proof Silver Dollar Series from the Native American Mint and the Jamul Sovereign Nation has been active since 2015. The collection offers a minimum of six designs in most release years, with some recent date marks offering more than that number. With each release, a new region of the country and historic tribe are represented.

With the release of the Proof Wisconsin Potawatomi American Badger Coin, the Great Lakes takes center stage again in the collection. The people of the Potawatomi tribe once inhabited lands stretching from the western Great Lakes around Michigan and Wisconsin through the upper Great Plains across Indiana, Illinois, and Kansas. Though most of the Potawatomi people were relocated in the 19th century to reservations in what is now Oklahoma, several bands survived in the Great Lakes region and have since earned federal recognition from the US government.

On the reverse side of 2021 Proof Silver Wisconsin Potawatomi American Badger Coins is a depiction of the American badger. Loosely related to the European badger, the American badger is found throughout western, central, and eastern United States, as well as northern Mexico and portions of south-central Canada.

These 2021 1 oz Proof Silver Wisconsin Potawatomi American Badger Coins are available to you online with protective plastic capsules. The coins in this series have satin-proof visuals. This refers to the matte, frosted designs overlaying mirrored fields.

Silver.com is here to assist you with questions when you buy silver at 888-989-7223. We are also available online through our live chat and email address features.