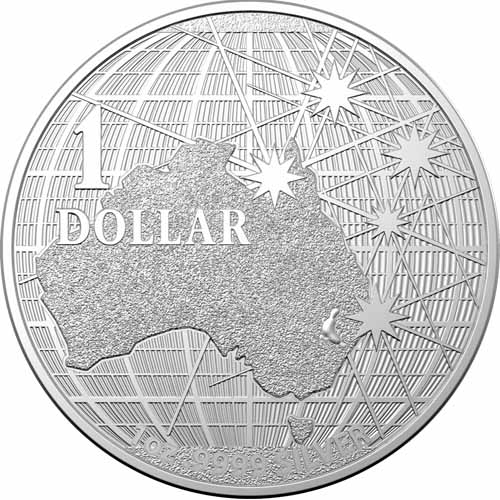 Struck by the Royal Australian Mint, the Beneath the Southern Skies Series of silver coins for sale offers various symbols of Australia in its reverse design. With the same reverse and obverse designs offered each year, the collection is a steady option for investors. Today, 2021 1 oz Silver Australian Beneath the Southern Skies Coins are available to you online at Silver.com.

The Southern Cross constellation, known officially as the Crux, has proven as vital to mariners in the southern hemisphere over the centuries as the North Star in the northern hemisphere. A steady influence in the heavens, the Southern Cross features four bright stars in a kite-like shape that looks like a cross when lines connect it are drawn across the constellation.

All of the 2021 1 oz Silver Australian Beneath the Southern Skies Coins available here come with individual or multiple packaging options. Single coins ship inside of plastic capsules, with multiples of 25 housed in acrylic tubes. Monster Boxes are available for multiples of 500 coins, with a total of 20 tubes inside of the box.

On the obverse of 2021 Silver Australian Beneath the Southern Skies Coins is an effigy of Queen Elizabeth II. The sixth-generation effigy of the Queen to showcase on Australian coins, this design is the first since 1966 to include her full neckline and her shoulders within the portrait field. In the design, the Queen is wearing the George IV State Diadem Crown.

The reverse field of 2021 1 oz Australian Beneath the Southern Skies Coins comes with several symbols of the nation. The stars of the Southern Cross feature on the right side of the design field, with the mainland Australian continent in the background dominating the left side. You will also notice the Australian Antarctic, the island of Tasmania, and a small platypus within the design.

The Royal Australian Mint has served as the sovereign mint of Australia since it opened in 1965 in the federal capital of Canberra. The mint is the only other operating mint in the nation aside from the state-owned Perth Mint in Western Australia.

Please contact Silver.com with any questions. You can reach us on the phone at 888-989-7223, online using our live chat, and through our email address.