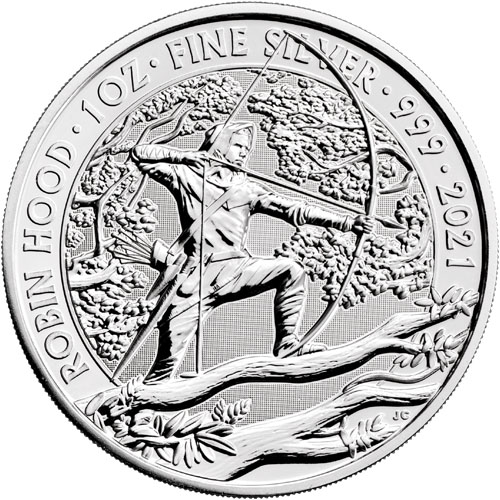 The Royal Mint is set to transport lovers of folktales and cultural legends back in time across centuries with a new three-coin series of gold and silver bullion. The Myths and Legends Series kicks off in 2021 with the release of a design honoring one of England’s greatest defenders of the common man: Robin Hood. Today, the first design of the series is available in the 2021 1 oz Silver British Robin Hood Coin listed online at Silver.com.

In the new Myths and Legends Series, the Royal Mint prepares to take investors and collectors on a journey back through nearly 1,000 years of folklore and cultural legends from the British Isles. The first design of the series captures a depiction of the man whose deeds served as a symbol of compassion for the most vulnerable and overlooked members of society.

All 2021 1 oz Silver British Robin Hood Coins available to you today come in Brilliant Uncirculated condition. The first design of the planned three-coin series, the Robin Hood effigy will appear on gold and silver bullion coins in this collection. These silver coins are available in individual plastic flips or plastic tubes of 25 coins. Boxes are available for multiples of 500 coins with a total of 20 tubes in all.

On the obverse of 2021 Silver British Robin Hood Coins is the fifth-generation effigy of Her Majesty, Queen Elizabeth II. This stunning portrait shows the Queen aged 89 with the George IV State Diadem upon her head. The Queen’s effigy is backed by a guilloche design element and was designed in 2015 by Jody Clark.

The reverse of 2021 1 oz Silver Robin Hood Coins comes with another design from Mr. Clark. This depiction of Robin Hood places the famed outlaw on the branch of an oak amidst Sherwood Forest. He silently draws back an arrow in his bow and prepares to fire at his enemy. The Royal Mint issues these coins with a new micro-dot texture in the background of the reverse for greater security against attempted counterfeiting.

Robin Hood’s deeds are recounted the same across countless tales and stories over the centuries. He seeks to steal from the rich to help support the poor of the realm. However, while some stories cast him as a member of a noble family, other modern retellings suggest he fought alongside King Richard I in the Crusades before returning to England.

Please contact Silver.com if you have any questions about these coins. Our team is available at 888-989-7223, online through our live chat, and via our email address.