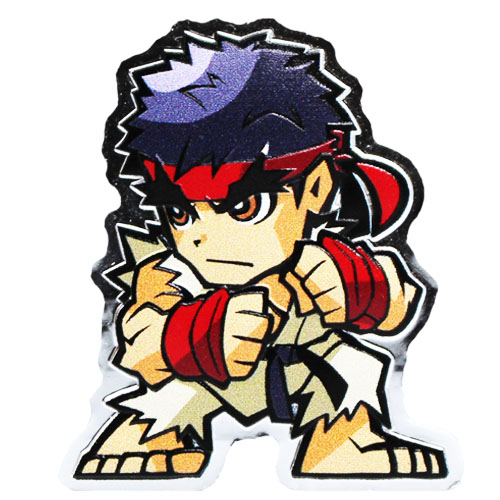 When Capcom introduced the Street Fighter arcade game in 1987, it was a landmark shift in what was then a young video game market. The game was the first major fighting game and it spawned a franchise that eventually featured a follow-up arcade game, console games, and even a live-action film. The main protagonist from the franchise is the first to feature in a new mini-character series. Today, 2021 1 oz Silver Fiji Street Fighter Series Ryu Coins are available to you online at Silver.com.

The Street Fighter arcade game was a massive success in the arcades of North America and Japan. The game introduced the concept of one-on-one combat in a fighting game wherein two characters engage in combat. The game was groundbreaking in its introduction of a six-button control for the fighters and the use of command-based unique moves for each character.

All of the 2021 1 oz Silver Fiji Street Fighter Series Ryu Coins available in this listing come with beautiful packaging. The coins are packaged individually inside presentation displays with an included Certificate of Authenticity. The mint has struck these coins on shaped blanks with colorized reverse visual elements. Additionally, each coin in the release comes with its own serial number struck on the obverse.

On the obverse of 2021 1 oz Silver Street Fighter Series Ryu Coins is the image of the national coat of arms for Fiji. The Fijian coat of arms includes a quartered shield with individual symbols in each quadrant that represent the culture, traditions, and commerce of the island nation. The shield is quartered by the Cross of St. George, supported on either side by native Fijian figures, and topped with a Polynesian outrigger canoe.

The reverse side of the 2021 1 oz Silver Fiji Ryu Coin comes with a depiction of the primary fighter from the Street Fighter franchise. Ryu’s character is often depicted as having an evil alter-ego, though this fact has always been criticized by fans of the game because the characters were presented differently, but given the same primary skills and combat moves. In this colorized design, Ryu is shown in his fighting stance wearing a red headband, white karate gi with the sleeves ripped off, and a black martial arts belt.

Please contact Silver.com with any questions about silver for sale. You can reach us on the phone at 888-989-7223, online through our live chat, and via our email address.