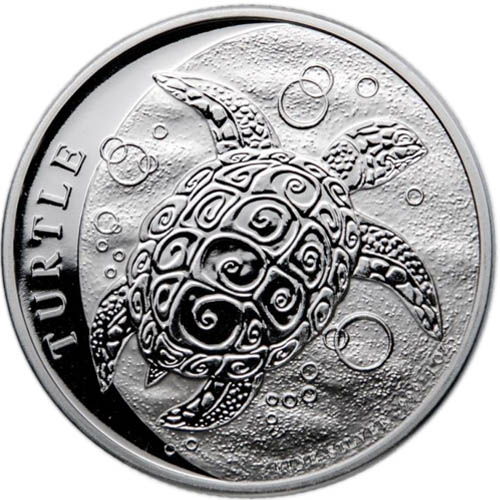 Any quantity available for $10.29 per oz over spot!

The latest release of the Silver Niue Hawksbill Turtles marks the start of a new decade for this popular silver bullion coin from the South Pacific. Originally introduced for the nation of Fiji, the coin has been a Niuean issue courtesy of the New Zealand Mint since 2014. Like the American Eagles, the Niue Hawksbills have the same design elements on the obverse and reverse each year. Now, 2021 1 oz Silver New Zealand $2 Niue Hawksbill Turtles are available to you for purchase online at Silver.com.

The New Zealand Mint is a private mint located in Auckland. While it produces an astonishing range of collectible, proof silver and gold coins, the Hawksbill Turtle is one of its longest-running collections. From 2010 to 2013, the series was released as the Silver Fiji Taku. Since 2014, it’s been issued as the Silver Niue Hawksbill.

There was little change to the series with its switch from the Fiji Taku to the Niue Hawksbill. In fact, the name Taku that represented the coin in its previous iteration simply used the native Fijian term for the hawksbill turtle, the Taku. The design on the reverse of the coins has been the same in every year, with only the term TAKU from the original release replaced by TURTLE in the Niue version.

The obverse side of 2021 1 oz Silver $2 Niue Hawksbill Turtles comes with an effigy of Queen Elizabeth II. This is the Ian Rank-Broadley design of the Queen that was created in 1998 for the Royal Mint of England. The fourth-generation effigy of Elizabeth II, Her Majesty is shown here wearing the Girls of Great Britain and Ireland Tiara.

On the reverse of 2021 1 oz Silver New Zealand $2 Niue Hawksbill Turtles is an image of the hawksbill turtle as it swims through shallow waters. The turtle is depicted with its ornate shell as it moves through the bubbles in the shallow reaches of the South Pacific.

These 2021 1 oz Silver New Zealand $2 Niue Hawksbill Turtles are available with protective flips for individual coins or plastic tubes for multiples of 20. All coins are in Brilliant Uncirculated condition.

Silver.com customer service is available at 888-989-7223. You can also chat with us live online or simply send us an email.