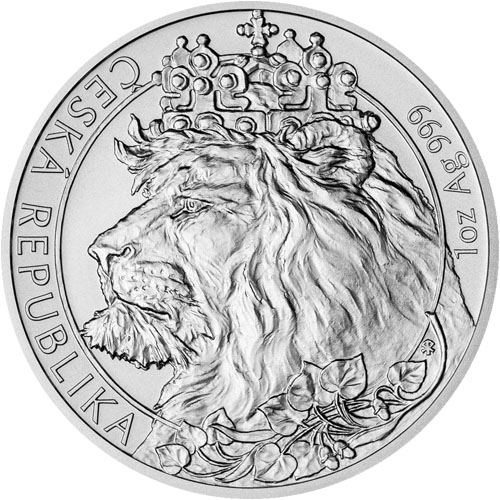 The Silver Czech Lion Series is a beautiful collection of bullion coins issued on behalf of Niue by the Czech Mint. The series started in 2017 and offers both gold and silver coins for sale. On the reverse of the coin each year, the mint features a new design element capturing the primary heraldic beast of the Czech Republic, the powerful lion. Right now, 2021 1 oz Silver Niue Czech Lions are available to purchase online at Silver.com.

The 2021 Silver Czech Lions have a few design rearrangements from previous years. The heraldic eagle and shield typically found on the reverse background have now been moved to the obverse background. Additionally, the lion image, though changed every year, is now a more realistic depiction of the king of the beasts. Previous issues had used heraldic, artistic depictions of the lion.

Obverse designs of the 2021 Silver Niue Czech Lions feature the portrait of Queen Elizabeth II at the center. The Queen’s effigy shown here was created in 1998 by Ian Rank-Broadley and has been widely used since that time in England, Australia, New Zealand, and other Commonwealth nations. The background field features the heraldic eagle and a shield as a supporting element. Prior to the 12th century, the eagle had been the primary heraldic beast of the Holy Roman Empire.

Historic chronicles speak of the mythical prince Bruncvik traveling to Africa where he helped a lion defeat a dragon. It was said that after this occurred, Emperor Frederick Barbarossa of the Holy Roman Empire rewarded Prince Vladislaus II with a new royal crown and the lion as a heraldic animal, replacing the eagle at that time.

On the reverse of 2021 1 oz Silver Czech Lions is a depiction of the Czech Lion. In this life-like depiction, the lion is found in left-profile relief. The massive beast wears the Crown of Saint Wenceslas from the Bohemian Crown Jewels. First made in 1346, the last monarch to wear the crown during a coronation ceremony was Ferdinand V in 1836. Along the bottom of the design rim, you will notice a linden branch in the field.

If you have any questions, Silver.com is happy to help. Our team is available at 888-989-7223, online using our live chat, and via our email address.