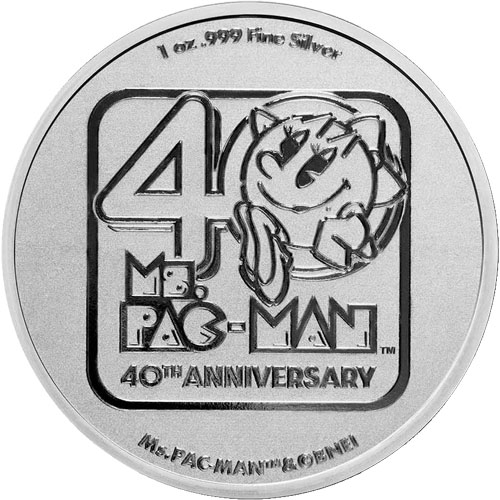 The Pac-Man franchise of maze action arcade games played a major role in shaping the gaming market of the early Eighties, and its bright and colorful characters remain major mascots for the Japanese publisher Bandai Namco Entertainment today. Ms. Pac-Man won critical praise and widespread popularity when it became the second entry in 1982, and the 40th Anniversary of its release is celebrated by the 2021 1 oz Silver Niue Ms. PAC-MAN 40th Anniversary Coin now available from Silver.com.

The 2021 Silver Niue Ms. PAC-MAN 40th Anniversary Coin is adorned on both sides with officially licensed Ms. Pac-Man imagery and arrives in a protective plastic capsule, or in rolls of twenty for larger orders. Silver.com ships these items fully insured against any possible damage or loss en route, and you’ll want to order early to get in on this limited mintage, certain to be sought after by collectors, investors, and fans of arcade classics.

Ms. Pac-Man has been a classic arcade character ever since her addition to the Pac-Man franchise in the early Eighties. The influential game that features her was similar to the original Pac-Man but elaborated on its design in several ways, and proved to be the highest-grossing arcade game of 1982. Ms. Pac-Man won multiple awards both in its original version and when it was ported to a variety of home gaming consoles, including Videogame of the Year in the Arcade Awards of 1983; it remained a best-selling game many years later and placed fifth on Time’s 50 Best Video Games of All Time list in 2016.

The coin’s reverse side celebrates this extraordinary legacy with the official Ms. Pac-Man 40th Anniversary logo, and a playful image of the character lounging posed at the heart of the design. It’s joined by the inscriptions “1 oz. 999 Fine Silver” and the trademarks for “Ms. PAC-MAN” and “GENEI.”

On the obverse side is the public seal of Niue with the accompanying inscriptions “Two Dollars” and “2021.” Around the rim, it’s decorated with sprites directly from the original video game.

Silver.com’s customer service department is always standing by to answer your questions about 1 oz silver coins. You can reach us at 888-989-7223, reach out through e-mail or connect with our online live chat.